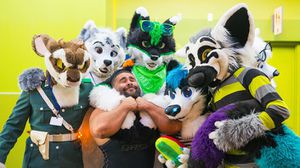 Ekigyuu was the developer and administrator of the now defunct website Furry Art Pile, later reborn as ArtPiles.

Dylan is accused of being involved with the death of one Jack Chapman (aka Pup Tank) involving silicone injection]]s. [1] The mother of Jack Chapman confronted Dylan regarding the death of her son stating he's completely responsible for Jack's death. She accused him of being manipulative, abusive and a leader of a cult.[2]