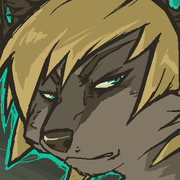 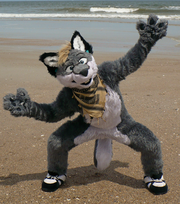 Edge's interests include music, playing guitar, drums, singing, art, fashion, collecting records, tattoos and body modification, thrift shopping, photography, aroma therapy and interior and graphic design. He has played guitar since the age of 15 and has had an interest in art from a very young age.

Edge first came across the furry fandom in 2005 but never was a participating member until March 5, 2008 when a friend convinced him to get a Fur Affinity account. His username was hastily thrown together from references to hardcore music and straight edge culture, the nickname Edge came from this.

Edge is known primarily as an artist, but also a musician and fursuiter. He frequently does both personal and commissioned work. He often attends Furry Weekend Atlanta and Elliott's Live Events but has also attended AnthroCon in the past.

Edge's fursona is a grey wolf with blonde hair and stretched ears, based upon his actual appearance. Initially he first drew himself as a plain brown wolf, later attempting to redesign his fursona but the markings of the design were ambiguous at best due to an old style he practiced that was heavily based upon realism. He then had his first commissioned work done of his fursona by McArson who simplified his markings into the basis of what his fursona is today with a few small modifications.

Art of Edge usually depicts him as extremely angry, sarcastic or in some kind of foul mood but in person he's far more calm and approachable.

Edge has drawn much influence for his digital art throughout the years from other artists within the fandom such as Cornershop, Patto, Kamui, Muttmonster, TaoRen and others. He also has mentioned his inspiration coming from underground artists within the music scene, primarily from Jacob Bannon and Dave Quiggle.

While taking inspiration from all these sources he maintains his own style known for often using heavy lines and textures. He uses Adobe Photoshop and Paint Tool Sai for his digital art.

Musical inspiration ranges from other electronic acts like Telefon Tel Aviv, Jon Hopkins, Porter Robinson, Seven Lions, and various trap artists. Much of his music features a focus on melodic and harmonic progression and non-electronic works take inspiration from metalcore, deathcore and such metal/hardcore sub-genres. He produces his music in Fruity Loops and uses Audacity for sample chopping. He also produces ambient/post rock music with similarities to other acts in the genres such as Explosions In The Sky, Hammock, This Will Destroy You and Caspian.