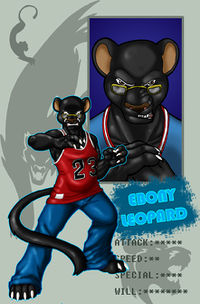 Shawntae Howard is a digital artist from Pennsylvania, USA.[1]

Shawntae was a panelist at Anthrocon 2000, and a Guest of Honor at Western Pennsylvania Furry Weekend in 2006, and at Morphicon 2013.[2]

Shawntae's anthro avatar was a black panther, with glasses and white markings on his face, who went by the name of Tamar. His avatar has since changed, and Tamar is now just used as a standard character, or for simple name recognition as Ebony Leopard.

Shawntae is the creator and artist of the webcomic Extinctioners, about a group of anthropomorphic superheroes, and published by Angry Viking Press. The majority of his artwork can currently be found on DeviantArt under his "Ebonyleopard" alias.

Initially published on Shanda Fantasy Arts, in January 2009 Shawntae moved the comic to small press publisher Angry Viking Press, continuing the series with issue #16. The comic is now published in full color, a feat it had not seen since its original issue which was released by Vision Comics back in July 1998.