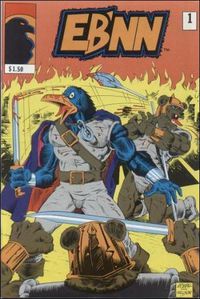 Eb'nn is a comic book series featuring anthropomorphic animals in a western setting. It was published by Now Comics and ran for six issues between October 1985 and January 1987.[1]

The titular Eb’nn is a raven who is found wandering in the desert wasteland by his friend, Jack the Rabbit.[2] Recovering from severe dehydration, Eb’nn decides to dress like the Man with No Name and become a bounty hunter.

With nothing but his six-gun, his wits, and a foot-long beak, Eb’nn tracks and captures criminals who flee from the long arm of the law, taking on such villains as Doctor Leo Phylum and Dirty Dingo Dawg.