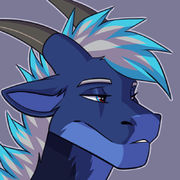 Earthstorm, or just Earth, also known as Schism, is a furry fan, photographer, 3D artist and developer who lives in London, United Kingdom.

Earthstorm has been a part of the furry community for many years before creating his account on Fur Affinity in November 2014. Since then, he has been seen on multiple social media sites, including Twitter, Discord and Telegram. He has recently become a photographer for Jeetix where his photos can be seen on Jeetix's website, Furpile.info.

In the year 2020, Earthstorm joined the Rubber Dragon Labs community and has since become the co-owner, main developer, and head admin of the community's Discord server where he works closely with the original creator, Jackie Demon. Rubber Dragon Labs being the main home of the Rubber dragon species. To this date, he has produced several large updates to the VRChat world, most notably the Udon update.

Earthstorm's fursona is a furred dragon. There has been one iteration of Earthstorm before the current version of the fursona. The first one was created by Little-Fire[1], the second being created by WagnerMutt[2].

He has no preference for what he is called, most people refer to him by his username, Earthstorm. Although, his actual dragon's name has been revealed to be Schism.

The lore for his dragon isn't exactly well known, nor the actual name of his fursona as Earthstorm was just his username since World of Warcraft. However, the more accurate description of the dragon is that it is a Temporal dragon, a species that are adept at manipulating space and time using magic. Their bodies using runic tattoos as a method of channeling said magic.