Earth Eternal is a browser based massively multiplayer online role-playing game (MMORPG) developed by Iron Realms Entertainment. The game has temporarily been removed due to Sparkplay Media going out of business.

Earth Eternal features a distinctive anthropomorphic element, with 22 available races for player characters, each of which is based around a particular species of animal. In the setting of Earth Eternal, human beings have vanished and are creatures of myth and legend, while many landmarks and signs of human civilization - such as the Eiffel Tower - still remain upon the earth. Various animals have evolved to replace man as the intelligent rulers of the world.

The developers of the game have expressed that whether or not Earth Eternal is a "furry" game is a matter of perspective, and that they did not know of the furry fandom when creating it. They also state that there is no objection to furry fans in conjunction with the game.

Earth Eternal has been bought by Japanese online game company Sankando, and is offline until re-release. On July 21, 2011, the Earth Eternal website was reopened and the game is scheduled to be released in North America in Summer 2011.

As of November 24, 2011 at 9 PM EST, the game and website once again went offline for an indefinite period of time.

With no official resurrection in sight, fan-made "private" game servers have come online. The first originally called Planet Forever (now defunct) with two others that have recently appeared to replace it, The Scourge of Abidan/The Anubian War and Earth Eternal Reboot are now around for Earth Eternal players to enjoy. 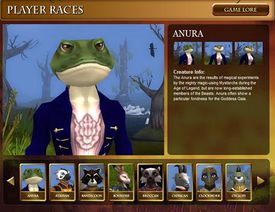 In addition to numerous other types of clans, there are several furry-related clans that have been formed on Earth Eternal. Furry Group is in the top 5 most popular clans on the game, with over 160 members as of July 2010, and other popular furry-related clans include Furry Inquisition, Super Sized Furries, Furian Enforcers, Rainbow Furries, and Villains of Fur.