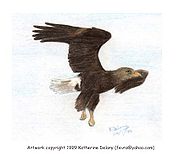 A White-tailed Sea Eagle in flight; image inspired by The Stonor Eagles

An eagle refers to a group of raptor birds of the Accipiter family that includes the largest raptors in the world. Eagles, like the related hawks, are renowned for their strength, keen vision, and power of flight.

The eagle, as a symbol of power, has been adopted as a national emblem of many nations past and present including the Roman Empire, the United States of America, the German Third Reich, Poland, Mexico, the Czech Republic, Ghana and various states and organizations throughout the Arabian world.

Eagles are also highly favored spiritually, especially amongst Native Americans. Native Americans revere eagles as sacred religious objects and the feathers and parts of Bald and Golden Eagles are often compared to the Bible and crucifix. Eagle feathers are often used in various ceremonies and are used to honor noteworthy achievements and qualities such as exceptional leadership and bravery.

Of all birds, eagles are among the handful that can be found among the ranks of furries (or featheries, as bird-types may prefer to call themselves) as personal characters. Eagles, especially male eagles, tend to be stereotyped as stodgy, like the Muppet character Sam the Eagle, although the Disney animated film The Rescuers Down Under included an non-anthro eagle as a supporting character. A couple known eagle featheries are C Eagle and Lanakila. Those who appreciate eagles may prefer gryphons.