e621 is a mature image board replacement for the image board Sidechan. A general audience image board, e926 (formerly e961) complements this site. E621 runs off of the Ouroboros platform, a danbooru-style software specifically designed for the site. It is likely that the site is named for the compound monosodium glutamate, whose E Number is E621. 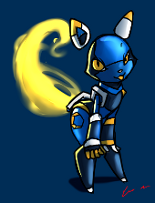 In response to this, the administrators announced that they would select a mascot among themselves. After deliberation, they selected a five character mascot team from the leaders of the poll, featuring characters by Mellis, Chizi, Keishinkae, Darkdoomer and Manafox.[13]

In July 2009, a work-safe counterpart, e961.net, was brought online. The site was named after the E number of the then-new artificial sweetener, Neotame. Unfortunately, in November 2009 it was aliased to the original site due to traffic issues caused by the popularity of e621.[14] However, users who want to view only safe for work content can use the "rating:safe" tag to exclude all mature content from e621, except banner adverts which will still include adult content. Images can also be filtered by placing ratings (i.e., rating:explicit) on the tag blacklist.

In November 2012, e961 was rebuilt as e926, a joke for it being a "bleached" version of the site, was reinstated along with updates to the main site. It displays content from e621 that strictly has a "Safe" rating. The site's login system shares e621's login database and servers, but requires a separate login, as it has its own cookies. Notably, it also has its own "safe for work" advertising. However, like the main e621 domain, users under 18 years of age are not allowed to visit e926, due to the aforementioned shared database and servers.