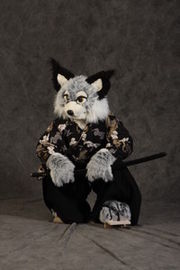 Dusty Rhoades (born April 22, 1968)[1] is an artist and fursuiter whose fursona, DustyKat, is a motorcycle-riding Lynx. His character Dusty has been on FurryMuck since 1990 and he owns and runs Harley-Davidson of FurryMuck.

Dusty has been active in the Furry Fandom since the late 1980s. With several friends in the northeast, he started the Furthest North Crew (FNC), an amateur press association that is still active. An active artist, Dusty recently turned his creative endeavors towards film, co-producing and acting in Under the Same Sky, released at Further Confusion 2008.

Earlier work by Dustykat includes comic page work in Furrlough, Genus and Hit the Beach comics. He also has done animation voice over work for friends. Best known of these works is "Something to Remember" by Christina "Smudge" Hanson. He plays the Wolf Mercenary who teaches young Ebin a lesson in relationships.

Dustykat started his art endeavors by producing his own mini comic called "The Hywayman" which went on for 3 issues.

He has put his considerable and wide-ranging talents to use producing and performing at fan events at many furry conventions. One little known and not often heard expression is an old school hip-hop filk he wrote and recorded in conjunction with notable Detroit based musician, fellow furry, and co founder of Furthest North Crew Mick Collins

Dustykat was Staff on Further Confusion 2009 "Surf Safari" as Furry Night Live 2nd, he also performed in the Skit "Jungle Love" that was non-judged content. He designed and made the sand filed glass bottle trophies that were awarded at the FNL show for 2009. This year he was also involved with design ideas and production of "The great Tiki project"(tm) where wooden tiki's were designed by artists and produced for sale by Mononorous media.

In 2010, Dusty attended Califur and appeared in two skits during the Furry Night Live show, Smokin in the boys room, and Devil went down to Georgia. He helped organize the production of the ninja troupe for that show. He also attended Antheria

In 2011, he made a surprise appearance in the FC Unleashed show at Further Confusion with Furball2K as they broke out into a hockey fight to end the show.

Dustykat is an avid motorcyclist, he races motocross as well as riding on the street. He owns and works on solid state pinball machines (mostly from the late 70's). Dustykat collects my little pony merchandise and furry based comics with an emphasis on Usagi Yojimbo. He plays hockey, softball, rides bicycles and has been an athlete his whole life. Once deep in the Society for Creative Anachronism or SCA he still likes to dust off the armor and beat on people with sticks now and then.