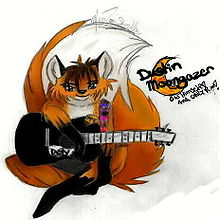 Dusty Moongazer, also known as FoxFuzz is a 5'3", 115lb anthropomorphic red fox (Vulpes vulpes). Originally created for the America Online chatroom known as the Red Dragon Inn, he currently spans across several worlds and genras. He is a native of Chicago, Illinois.

In the online virtual world of Second Life, he goes by the name of Dusty Montale. It is here where his personality matches his player the most, and 'role playing' is only done on occasional situations. While in Second Life, Dusty is often found doing free lance DJing for clubs such as Club Pawprintz and Wild Thingz. Dusty Montale's personality can be best summed up as a wise cracking, smart alec who is fiercly loyal to his friends.

In the text based world of Tapestries, he goes by the name of FoxFuzz.