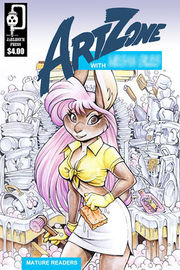 Dustmeat, also known as Diana Cervantes, formerly as Spacecat (born March 24, 1972), is a traditional and digital media furry and fantasy artist who resides in California, USA.

Dustmeat has attended several furry conventions around the USA. Her work has appeared in numerous professional and fan publications, some of which include Furrlough, Huzzah, Gallery, North American Fur, Hit the Beach and Shanda the Panda.

She was Artist Guest of Honor for Furry Fiesta 2011, and Califur 10. Furspeech wise, she coined the term "Air Sacs" to describe, tongue in cheek, female breasts drawn or painted on any non-mammalian avian furry characters.

Her furry art is a favorite among some of the non-furry tattoo and cross stitching enthusiasts in the United States and Europe,[1] and while her art varies in style, it can be most correctly described as "realistic cartooning".