William Boles (also known as Dripdry) has been a part of the Michigan Sci-Fi convention scene since 1976. He learned of the furry fandom when, on a whim, he picked up a copy of Wild Life #2 in a comic shop. A short time later, he attended his first convention with a furry track - Duckon 7. 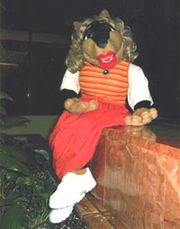 It was at this convention that he first saw puppeteer Steve Plunkett performing. He found the performance interesting, and decided to get into puppetry himself. After a short search, he found a builder and commissioned the construction of Gina Doberman. That year, he performed for the first time at MFF 2002, and regularly rooms with Mr. Plunkett at cons, most notably Morphicon in Ohio.