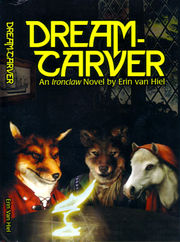 Dream-Carver is a fantasy novel written by Erin van Hiel, published in 2007 by Sanguine Productions. The novel is set in the world of Ironclaw, and relates a search by pirates through unknown islands, for the source of some strange, glowing glass figurines. Author Erin van Hiel is the wife of Pyat, who wrote supplementary material for Ironclaw.

Reviews included one from Fred Patten in Anthro #17. Patten said the text was full of "lengthy descriptions that are rich in colorful detail." Dronon praised the author's clear and descriptive text, but said that "the book could have benefited from a stronger, more evocative sense of atmosphere and emotion."[1]

This was the third (and so far last) Ironclaw novel to be published. The previous two, Scars and Black Iron, were written by Ted MacKinnon and published by Sofawolf Press.

Dream-Carver was based on events in Pyat's home game of Ironclaw, which ran between 2002 and 2006. The book's cover art was created by Redstorm, who, along with Wgg the Gnoll and Erin herself, were the first players in Pyat's game. Erin played Annarise, the primary narrator of the book, while Redstorm was Treeden, and Wgg played Captain Salvatore. Later games saw the addition of two other players, who also inspired characters in the novel.