Drayk started as a Watcher/Commissioner on Fur Affinity. Drayk is known through Fur Affinity and Second Life. He frequently commissions artwork from various artist even when he got paid below minimum wage. 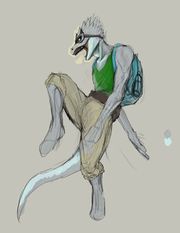 Daryk's fursona is a male intersex Shurian, a reptile with arm blades, crystalline head spikes or horns, and the ability to change color.

Drama: The disappearance of Drayk After Drayk received his 43000 pageview he said that he only received those because of the porn of his fursona. So he thought of a way to anger all of his watchers, in order to get back at the people that only are there for the porn. September 9th 2007 Drayk deleted his entire FA account, later he left a journal "- 1 Cuntboy" In the journal Drayk says everything on his journal is deleted because he is leaving FA, signed Janarr (Drayks alter ego). Drayk told his fans that there are people that would do that to him, and he knew it is fully possible to hack into his account when FA got hacked into during FA:U. So his fans believed either that someone managed to hack into his account, or Drayk has some emotional problems (for example he is tired of being known as Drayk the sex object and he wants to be known as Janarr the Badass) and took it out on his FA account. After he noticed his watchers fell for it he created another journal to stoke the fire called "I do belive I said - 1". By then Drayk has already told a few of his close friends that this is a joke so they would not fall for it. :O, O RLY!? -TehMasso

Before Drayk admitted to his watchers that he erased himself from FA for some laughs, some of his watchers reported the "hack" to the admins who the froze Drayk's account. Things did not go according to plan when Drayk's account was frozen. He had to go on FA's forums and admit that the whole thing was a joke.

After Drayk got his account back, he made a long journal titled "Jeebus Christ" in which he said that it could never happen for any other reason then it being a joke. People responded to this journal saying "I knew it all along." when they where panicking on other forums about it.