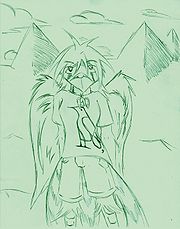 Drakonstance K-T is a dragon fursuiter who resides in Massachusetts and frequents FurNet's #hypnosis. He is best characterized as "moody" or "cynical" and is known to often have bizarre swings in mood and demeanor, which he expresses using two fursonas: A rust-colored Lanner Falcon, often carrying a stone-bound book with a Wdjat Eye for happier, chipper moods, and a sullen pink dragon with a knife and green robe in reference to the Tonberry character in the Final Fantasy series of games for apathetic or serious moods. He adopted the avian fursona in early 08, to better suit himself with a potential mate, while the dragon fursona he has had as an avatar from before he was involved in the furry fandom. He has a particularly dark, sometimes offensive sense of humor and sometimes posts strange or offensive pictures and passes it off as a prank.

He is an amateur artist who primarily draws hypnosis and transformation -themed art. He rarely ever colors any work, due to it being "a bother" and often posts his work on vividly-colored paper, using a sketchy style. He is quite outspoken on commissions, often stating that he bitterly hates being told what to draw even for money and as such takes "his sweet time" which can mean two months to a year to complete even simple works, usually refunding the commissioner the full price plus five dollars if nothing is produced after that time.

Drakonstance can be found at many conventions, most frequently FurFright, clad in the green robe and pink dragon partial made by Magnus Diridian and wielding a large imitation chef's knife. He originally pretended to stalk and after a long wait attack other fursuiters but after several warnings by convention security he now keeps it in hand or tucked under the robe.