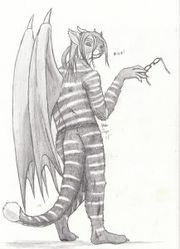 One of Drako's Latest images, Drawn by Mix Tags

Drako Swiftclaw (born October 27, 1984) (pronounced more like Draco, also known as The Dragonheart Tabby) is a tabby/mewtwo/dragon hybrid babyfur furry in Seattle, WA. He commonly calls himself a kitty, has black fur with white markings, and his 'sona usually wears a black silk loincloth.

He was formerly known as Drako Tags during the time he was mated to Mix Tags, but has changed to his new last name after that relationship left him broken.

He is now mated and married to Steel Pup and is the pet of Zion Wulfspau. The relationship is Polyamorous/Open so he has been known to be rather flirtatious and would tease others fairly quickly.

He has lived in the Seattle area (and Bellevue) for 26 years before moving to SC with Mix Tags in the summer of 2011. After some hardships from changes to that relationship, he moved back to Seattle in 2016.

Drako has attended Conifur Northwest 2005, which was his first convention. He enjoyed the con, and will go again. However, Conifur was canceled due to a lack of hotel, and thanks to drama, or many other reasons that led Conifer to fail, it has been replaced by Rainfurrest. Drako was at the first Rainfurrest Con in 2007, and even though he missed the 2008 con due to a job change, he was there in 2009 and 2015.

Drako works during the day at a local Home Depot. He is also the founder of Drako's Website Services, which provides website hosting and authoring services to anyone who wants a website without having to deal with the work of owning a website. Drako's Website Services prides themselves as being the only service to offer free website creation, maintenance, and hosting.

He continues to work on projects for Drakos's Website Services, including Drako's Den and Playground, and Drako's Wireless Review.

Alongside the aforementioned, Drako also does computer and website work as an Independent Service Specialist, offering consultant services under the DTech Seattle Service Mark.

Drako leads a life mostly consisting of working on websites.

Drako's Website Services does own a small community website that is open and unrestricted. Drako's Den, as it is now known, is an online radio station and community that accepts all kinds of people, including furries. DD also includes services that offer image hosting and sharing (adult images allowed), forums, chat, and e-Mail. DD, like its parent company, prides itself in being a free website.

The DD Community has a chat room and forums that receive regular Guests of Honor. Guests of Honor include big name people within the fandom and beyond such as Dennis "Cat" Avner, and 2 the Ranting Gryphon.