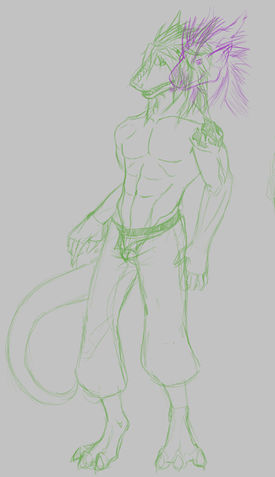 Drakkoid in his current incarnation as a wingless dragon.

(The) Drakkoid is an bisexual anthropomorphic-dragon artist who resides in the USA.

Drakkoid has been drawing since around 2005, starting with anime using the now-abandoned screen-name Erosan. He tends to have a rather repetitive art style, usually drawing his own fursona in a recurrent pose, but is beginning to vary his drawing subjects and poses, if only slightly. He draws from a cast of characters that make up a story he is in the slow process of writing. These characters include Drakkoid, Nik, Erosan, Musca, Shiin, Wong, Koyaku, Dirok, Draynn, and an as-yet-unnamed character.

Drakkoid is a friendly person and enjoys talking to new people, but is very random and scatterbrained. He is good friends with mates Alexander Wolf and Sebek Umber and is an avid fan of Clawcast. He operates on a MacBook using Photoshop Elements 4.

Drakkoid started out as nothing more than a character on miscellaneous Roleplay sites. He was then transformed into an anthropomorphic dragon from his previous, more western style of existence. He would later lose his wings on account of his creator's laziness and has remained such since. His most distinguishing traits are his ever-changing hair colors and a third color pattern down the middle of his secondary color stripe.

Drakkoid is a full-blooded Dracono, which is a mammalian species**, is 7' 3" tall, with a tail length of 4' 8", and three vestigial horns near the tip of his tail, and has naturally black hair, identically shaped tattoo's on his left shoulder and right thigh* the one on the thigh is larger*, and a rare tri-pigmentation, giving him golden, silver, and purple scales. His species scales are so minuscule that it doesn't feel like scales at all, more like leather. His eyes are an emerald green, five silver ridges on his nasal, and has two piercings in the top of his right ear. His wings were ripped off by an inter-dimensional vortex. He now has two scars where his wings used to be on his back from where the remnants were surgically removed. He is 23 Moons(their equivalent to years, it takes one of their moons a year to revolve**) old with an April 16th birthday, and attends a college and works at a What is essentially a cafe. He is an avid SkyRider and is the Hrathgin(Co-Captain) of the wrestler's team**. He also enjoys nighttime dance clubs, and even in daytime can be seen in his favorite one-armed mesh shirt. He often partakes in a promiscuous lifestyle, however, it is an acceptable, if not always approved, lifestyle. On this note, he is bisexual, but most would say he was gay** from his choices the past few years. He has had two or three serious, long-term relationships, but they all ended in breakup because of no fault or action on his part, and this led to his decisions.he is also a seasoned drinker*drinking age being 14 moons* and takes stress smokes**. He lives in an apartment* with Nik, Musca, and Erosan. He also works with Erosan at the cafe they have 'affectionately' nicknamed the "Cafe de Sade". He was adopted at a young age, so he has no idea who his true sire or seer was, but does not dwell on this, as his adoptive ones have been all he needed.