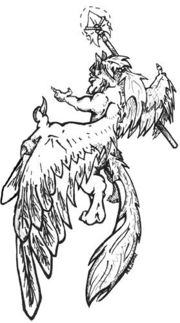 Drakenhart, also known as HLBryant, Halfbreed (DeviantArt/Fur Affinity only) and as DarkenedHart (elsewhere), is an artist of various types and styles of art and craft. She has expanded from simple graphite (pencil) drawings into a wider variety of traditional media and digital media. With a BS in Computer Animation and a love for teaching that matches her love of art (and horses), she enjoys creating monsters, creatures, "things" and often crafts fan art often in the form of parody artwork.

She is a heavy proponent for teaching the web masses about the reality behind copyright, fair use, and art theft.

Drakenhart (born in 1977) sought schooling at AIPH (Art Institute of Philadelphia) for Computer Animation, earning her Bachelor of Science in a (traditionally) art degree. She is currently located in Florida, and working as a freelance animator, illustrator, and web designer (spec: graphics/interface design, ads, flyers, business identification).

In 2006 she gave birth to a son, and in 2011 a daughter, with whom she watches cartoons regularly. With her kids, she started watching the new My Little Pony and her old obsession with the show was enhanced by the wonder of the new one. She and her kids are all "bronies".

At her first convention (Balticon 30),Drakenhart learned what the term anthropomorphic meant from the renowned artist Vicky Wyman. She was enchanted by the art and characters of Xanadu and became a fan almost instantly. Enthralled by the characters and the whole idea of anthropomorphic animals, she expanded her "creature gallery" from just were-beasts, dragons, and other fantasy creatures, into other areas touched by anthropomorphic fantasy. It wasn't until 1999 that Drakenhart discovered that the furry fandom even existed; before then she believed she was one of a small few who enjoyed making up "strange creatures".

With this discovery, she met a greater number of similar artists and expanded her style and thinking in terms of art. She focuses now more on fantasy biology and anatomy, trying to make her creations more lifelike and realistic. She is a fan of artwork that shows that the creator is thinking in terms of physics, and logic, as well as creativity.

This does not stop her from creating cartoon characters or drawing in a more "toony" art style. She is one of a number of adults in the fandom that still watches and enjoys cartoons.

Lately, she has devoted her time and effort to work as an admin on the Furry Facebook Group FurReal, and with a special fur-community start-up (to be named).

When Anthrocon left Philadelphia she wasn't able to follow it and stopped attending conventions in general for a while. This was more to do with money and travel expenses than anything else. When FA United cropped up, it was a lot closer and she made May 2011 with an added bonus. She hosted a panel on how to draw hands and feet. She expanded her offer the next year (2012) and did a panel on both hands and feet as well as super-basics in character design.

This was a lot more popular than she thought. As she is not a "popufur" (and hopes never to be due to the ensuing drama attached to it) she didn't think there would be a very great draw. However the topic(s) were what drew them in, and the panels were filled to standing room only. It has driven her to make more plans for attending other conventions with these "Basic Art 101" type panels.

With a recent move to Floria, she hopes to attend more of the conventions down there (especially Megaplex!).

"Why not share the wealth of knowledge? I have a 50k+ Degree in Animation that I need to do something with after all." ~ Quote (said jokingly).

Shortly thereafter she started redesigning her website and became much more serious about her art. There is a Facebook page dedicated to her art and educational materials for artists, designers, and other creative types. She holds Galleries on Deviant Art, FurAffinity, Inbunny, Weasyl, and Sofurry. She can be found on LinkedIn as well. She is an admin for at least 3 Furry-related groups on Facebook and is very active in helping others learn to improve their own art.

It was once pointed out to her by a college roommate that her art style was very similar to that found in Treasure Planet. She has always stood out as not having any particular "style" when referenced to other artists' styles. As much as she craves to have the "animation quality" to her line art, she also doesn't want to come across as a "copy artist" either.

Her style morphs slightly depending on the subject matter and medium used when crafting artwork. It ranges from super-realistic graphite renderings (that take into account real human anatomy, real animal anatomy, and fantasy hybrid anatomy), to super-cute cartoony art that is not specifically reflective of any major company's art style. This uniqueness is partly dependent on Drakenhart's ability to take little pieces of what she likes, and add it to her always-growing and expanding art style. Another factor is her inability to copy, exactly, any particular art style.

She has tried and failed, in the past to copy artwork or artwork styles in order to learn. The best copies she made were direct-tracings. Though she understands that tracing can be a tool (to learn), it is not professional nor ethical to claim, forget to cite, or sell such pieces. Thus, even though animation required being able to "copy" a style or character, she continued to work on her own. Thus in doing so continued defining her art through other means and skills.

Her most recent improvements have been in the arena of Web Design and Graphic Design.

Drakenhart learned the art of crochet, as she wanted to make her own Bellydancing outfit. She realized the scarves often had crocheted coins and such on them and decided it was a challenge. She has since made a number of other items from Harry Potter scarves to a TARDIS hat for her step-daughter's bestie.

She also dabbles in foam art and has tried creating MLP based ornaments using a simple cut-out technique. She's discovered that foam dulls xacto blades a lot. So the MLP fan ornament project is on hold at this time.

She dabbles in sculpture and random weird crafting ideas. This has to lead her to some attempts at mixed-media ATCs and ACEOs