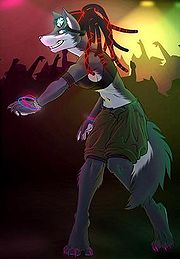 DragonWolf is a silver/white wolf furry with blue eyes. Her distinguishing features are her black hair with red bangs and her pierced ears: 3 studs on the left, cuff with chain and 2nd stud on the right. She enjoys being active in both the fandom - with her personal business DW Creations - and performing in shows, photo shoots and other activities outside the fandom.

The Real DW, pictured with Jada Pinkett-Smith. Ozzfest 2006
Daphne, or "Daph", as she's usually called outside the fandom, was born January 7, 1981 in Charlotte NC. She's always been on the wild side, enjoying a wide variety of activities. She is a therian, her grandfather having taught her about the Cherokee Wolf Clan, from which she is a descendant, and whose totem she has been known to embody. She presently works for an internationally known Internet company as an admin for one of their sites.

DW with Scott Kirkland of The Crystal Method, showing off a rare autographed print she won at the Charlotte concert, 2009

Aside from her occupation, she also models in her spare time. She has done many photo shoots, and pictures can be seen on various sites such as One Model Place, Model Mayhem, and deviantART. She has done runway as well, and has taken part in a video photo shoot with internationally known hair stylist Barry Fletcher for Dudley Hair products. She played an integral role in a music video for the horror punk band Nightmare Sonata. Aside from being in front of the camera, she also enjoys time behind the camera, and has taken her share of pictures and shoots.

Along with photo shoots, this talented fur enjoys time onstage, working for SingleCell Productions, one of the top fetish scene performance groups in the Southeast. She's headlined many shows, especially for the well known event, Purgatory.

DW is working on her own Industrial music group: Negativ Image. She can play keyboard, bass, and guitar, but prefers vocals, going by the name Anji-D.

DragonWolf, or DW as she's also known, is a feisty 5'8" silver/white wolf with a love for raves, music and dancing. She grew up loving Industrial, Drum & Bass, and J-Rock. Aside from her crisp cerulean blue eyes framed by red bangs and black hair, her clothes are a dead giveaway to her personality. She's usually seen wearing bondage pants with straps and chains, and more pockets than absolutely necessary, although she'll tell you "the more pockets, the better". She's never without at least a wristful of bracelets or a wrist cuff, and a pair of cyber goggles. She's a fan of tribal designs, and usually wears a shirt with some kind of tribal on it. You won't see her without her trusty PSP. She actually likes a wide range of music, and has been known to DJ from time to time, though she would rather be the playful fur in the crowd dancing. Loyal to her friends, she'll defend them tooth and claw if the occasion calls for it.

DW has a personal comic, The Brat Pack, dedicated to her friends and the real life antics they've gone through. When she completes her website, dragonwolf.negative-image.net, expect to find the comics right there.

DW Creations is DragonWolf's personal business, making various partial pieces, but specializing in accessories for fursuits such as piercings, cybergoggles, glasses/shades, hats/visors, and other items that are proportional to the suit itself. Her work can be seen in her LiveJournal.

DragonWolf has attended Furry Weekend Atlanta since it began in 2004. She has been on staff for several years, beginning in 2006 as a volunteer. She also attended Anthrocon 2007, hosting The Matta Hatta Tea Party with her best friend Matafleur.