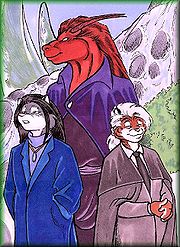 Dragon, Wolf & Tiger, from the cover of Open Your Eyes

Brand is a seven-foot red dragon (no wings), powerfully built and sharp-minded. He is the percussionist and plays both acoustic and electronic drums. Particularly, not only does he use all four limbs but his powerful tail as well. His drums are set up in a standard spread, with a selection of electronic percussion pads behind which are visible by means of a translucent reflective glass in front of his drum kit. Brand is married to Merrit, and has no children.

Adam is a timber wolf, lean and compact. He plays keyboards, piano and synthesizer for the band. His virtuosity is unmatched, and has been known to play feverish, counterpoint 32nd notes on two separate keyboards simultaneously. Adam is married to Elli, and has no children.

Carsen is a bengal tiger, slender but athletic. His primary instruments are the 5-string bass and Chapman Stick, though he also plays electric and acoustic guitars and a variety of other stringed instruments, such as the mandolin, koto, dulcimer, etc. Carsen is married to his guitar tech, Christopher. The pair have twins Ember and Carlos by way of artificial insemination via a surrogate.

Brand and Adam knew one another for several years and met through a science fiction club. The two discovered Carsen later and started group collaborations on illustrated fantasy stories together two years before the band got going.

Adam had played various musical instruments on and off for years, as had Carsen. They discovered a particular synergy in their initial collaborative efforts, but as time went by, also a palpable sense of competition that sometimes evolved into tension over creative directions for the music. Carsen was aggressive, choosing sharp-on-attack approaches and edgy experimentation from his basic jazz roots. Adam was more inclined to start with an intial idea and see it through to fulfillment, building in a specific direction toward a specific goal. These two approaches often clashed and their first effort showed the lack of synergy.

In an effort to make a coherent whole, the two enlisted Brand as their drummer to add both a third voice to the artistic direction and to punctuate their melodic work. Brand quickly became more a benevolent dictator than mere third member, taking root at the base of all the music and coaxing his partners to more and more adventurous leads.

On rare occasions, the trio partners with Jape Devon, who supplies vocals and guitar work.

The result of the recording sessions was the debut album “Azimuth,” which stunned music critics with its raw energy and eclectic sound. With the synthesizer-driven “Flight of the Zephyr” and giddy “Far Far Cry” as the opening and closing themes, the group demonstrated that here was a power trio with the emphasis on power. Brand’s solid, granite-firm drumming set the foundation beneath Adam’s harmonic keyboards, which traded off melodies with Carsen’s improvisational and often chaotic basslines. The dragon made sense by filling in the gap between the other artist’s statements and directing them toward his own goals.

Their second album, “Andromeda,” demonstrated a consistency that some critics panned as simply a rehash of the same material. Two pieces stood out, however, as artistic achievements: the dark and moody “All We Can Do” and the touching “A Place in Your Eyes.” The latter was a gentle ballad dedicated Carsen’s sadness on the passing of his eight year old brother, who succumbed to injuries after an auto accident.

“Chariot of Dreams” followed, with Adam taking lead vocals on the radio-friendly singles “Pedestal” (edited from its original seven-minutes-plus running time) and “Memory Obsession,” the latter of which was remixed into a dance single which became popular in teenage-oriented clubs. It was an odd accomplishment to be sure, but one which proved a financial boon to the trio.

Soon after, “To the Power of Three” showed an evolving band that was staking its claim in the musical world. The most mature of their offerings to date, it was the first of their albums to go platinum. Musically astute listeners discovered hidden Easter eggs within the arrangements, including several inside references to their musical influences.

But controversy stuck with the release of “The Eyes of Innocence.” The tender ballad, penned and sung by Vetter, paid homage to children lost to war, maltreatment, and hunger. The passionate lyrics, however, provoked activists in many corners to associate the song with topics as varied as abortion, alternative lifestyles, and advocacies of political agendas. Okami publishing decided that the single was too controversial and the band, in frustration and disgust at how the ideological Gestapo had reacted to the song, decided not to include it on their next album.

The band began recording their brief concept album, “Ship to Shore.” It featured themes based around water and sailing, and was Adam’s first attempt at producing and directing an album on his own. Carsen, it seemed, was willing to be yoked for the time being as they experimented with new techniques in recording. However the cooperation was more desperation than unity, as Carsen was dealing with a messy breakup with a longtime girlfriend, which left him emotionally drained and passive.

Following the brief tour, Carsen quickly assumed charge of “Fire on the Mountain” (aka "The Fuck You Album"), decidedly the most aggressive project the band had undertaken. After the brief hiatus, Brand returned with five song demos, Adam with seven, and Carson with twenty-three. Dominated by Carsen's compositions, the album dealt with the comings and goings of love--the goings, mostly--centering on the fallout from Carsen's bad relationship. This constituted the rockiest time for the band and Adam walked out of the recording sessions on many occasions. The angst anthem “Louder than Hell” was done without Adam’s input at all, and the title was even shortened to “Louder” at his request. However, the album also included the magnificent “Firedance,” a dizzying extravaganza of keyboard and guitar call-and-response that was the culmination of all of Carsen’s creative energies. The track is considered the canon of the group’s musical accomplishment.

Okami publishing wouldn’t support a tour and Carsen, it seemed, had reached a boiling point in his personal and professional life. The band decided to take a year off so that Brand and Adam could spend time with their wives and Carsen could get his life back in order.

That vacation ended at the four month point when the artist performing the title song for the next super-spy film cancelled at the last moment, and the trio was asked to fill in on short notice. They literally had to create and record a four-minute song for the opening of the new film in 48 hours. Taking creative license, the recycled “The Big Money” from the “Andromeda” album, removing the lyrics and speeding up the tempo so that the song finished one minute earlier and had a dizzying feel akin to a ballistic assault. The song went double paltinum and became their first number one single. This was a kind of therapy for Carsen, who was vindicated by the success after the bad situation that was the “Fire” album.

Success re-energized Carsen and the rest of the group, and was followed by a tour that resulted in “Live in Dallas,” their first live recording (notwithstanding bootlegs). On this, the band showed their artistic and humourous sides as they performed masterfully and poked fun at each other between songs.

Then, in the strangest career turn ever, they went back into the studio to simultaneously record two albums: the score for the new Summer blockbuster “Spanish Gold,” and the curious “Odd” album. “Spanish Gold” saw the enlistment of several other performers, including two vocalists other than Adam and Carsen. Their philosophy had always been “we are DWT, and DWT plays all the instruments” was abridged for the greater goal of serving the percussion-heavy score.

“Odd,” by contrast, demonstrated their bizarre and madcap sense of humour. A collection of left-field songs and sound-effects-laden interpretations (“The Body Danube” being a particular favourite among fans) of classical works, the album remains a cult favourite, even though it was a commercial disaster.

Again the group took time off. Brand began a series of lectures on radio and telecommunications at a major college while Adam and Carsen each released solo albums. The trio got back together for another live album, “Rings of Azetbour,” which featured the first recordings of several new songs that hadn’t yet been released as studio tracks. They also took over ownership of “Beast of the East,” another live show from Osaka, Japan, that had been floating around as a bootleg for years.

DWT was renowned not just for their music, but for the interpersonal conflict between the musicians. Carsen and Adam were almost always at loggerheads about which direction to take the music--which digressed into shouting matches on an unspecified number of occasions, and rumored to have involved fisticuffs now and again. Brand did what he could to manage them, as he was the oldest member ("Don't make me come back there!"), before deciding that wasn't his role. Apart from the difficulties with "Fire," Adam and Carsen drifted apart conceptually as they evolved as artists. Adam believed music and art should be about love, beauty, peace, harmony and that negativity should be shunned as something not to be glorified. Carsen believed in expressing ideas, plateauing emotion and communicating even the unpleasant side of things. Brand's contribution was usually, "I'll be in the car."

The resulting solo albums saw Adam mostly on his own, with piano and synthesizer and a couple of friends to join in. His solo works were exemplified by Wolf Alone, a collection of instrumentals on grand piano. Carsen was more adventurous, traveling the world and sampling different cultures, integrating regional instruments and musicians in his solo work. Most notably Discipline, which featured African drumming and Dreams in Blue, which incorporated Macedonian music.

A spontaneous but abrasive comment in an interview caused Adam and Brand to sever ties with Carsen, who refused to apologize for what he believed was a perfectly valid point of view. Instead of replacing him with another member, they decided to go on permanent hiatus until the issue calmed sufficiently. As neither the bassist nor the drummer and keyboardist would back down, this lasted three years.

The pair met one another, completely at random, at a music award show where each was slated to be a presenter. Without catalyst, Carsen started talking to Brand, who asked Adam's opinion, and the three started a dialogue as though the previous three years had never happened. Neither Carsen's abrasive comment or the others' stoic refusal to forgive it came up. After some catching up, they decided to get together at Brand's house with a drum pad, one guitar and a piano. From that initial jam session the foundation for what would become their comeback album "Open Your Eyes" was laid. The album, in essence, was about the importance of looking past individual events or beliefs into a wider field of vision and was summed up by the title track. 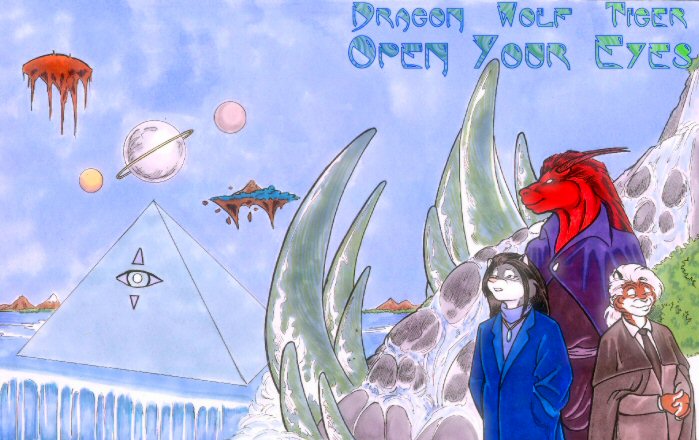 The reunion was short-lived, as it soon came to light that Singlebet had been engaged in some fraudulent activities during the down time. The band could not go on without his participation, so the whole endeavor closed shop and moved on with their respective lives.