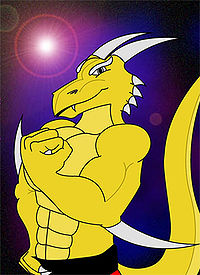 Draganta Starwind (born December 24, 1984) is a furry from Long Island, New York. He identifies as a fur despite his scalie character, an anthropomorphic wingless dragon, self-described as "the gold dragon of the stars."

Draganta is a furry artist, though releases new work infrequently. He is, by trade, a programmer and web designer, and maintains a personal website based entirely on his own code.