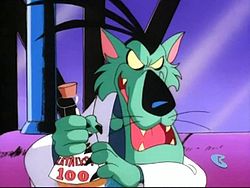 Dr. Viper is a character from the Hanna-Barbera cartoon SWAT Kats: The Radical Squadron. Originally named Dr. Elrod Purvis, he was a scientist who worked at Megakat Biochemical Labs until an experimental chemical, Viper Mutagen 368, spilled on him during his attempt to steal it. This caused him to become mutated into the fiendish and sadistic Dr. Viper, a mutant who is half cat and half snake. For reasons best known to himself, Viper, who lives in the mucky swamps outside of Megakat City, wants to turn the entire world into a mutation-filled swamp paradise. The only thing standing in his way are, of course, the heroic SWAT Kats, who always manage to stop his evil plans just like they do to all the other villains.

Although he was introduced in the first season episode The Giant Bacteria, wherein he tried to loot Megakat Biochemical with an army of giant bacteria monsters (made from fellow evildoer Morbulus), his origins were not dwelled on in that episode. The above backstory was given in the second season episode The Origin of Dr. Viper (a flashback episode set prior to the events of season one). Among Viper's other evil plans have been to take over the Megakat Tower in Destructive Nature, team up with Dark Kat and the Metallikats in the season one finale Katastrophe, and to flood Megakat City with a hideous mutating ooze in Mutation City. Doused with anti-mutagens at the end of Mutation City, he has not been seen since.

As far as the SWAT Kats fandom goes, Dr. Viper is an immensely popular villain, rivalling even the SWAT Kats' arch-enemy Dark Kat, shapeshifting jester Madkat, and one-hit wonder Turmoil as the show's most popular villain overall. He has a surprisingly dedicated (albeit small) following of female fans, including writer and artist Amanda Taylor and artist Ignigeno, who draw pictures and write stories revolving around him.