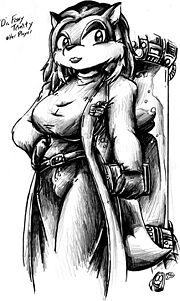 Dr. Foxy Trinity is a fictional character. She is a 6'3" anthropomorphic hermaphrodite Red Fox (Vulpes vulpes). Originally a sequel off a former, now retired FurryMUCK character, Dr. Foxy Trinity has developed considerable back story with over seven years of live play. Foxy can be found mainly on Tapestries MUCK, where she's known as DrFoxyTrinity.

Despite accusations, Foxy's ample proportions are mostly natural genetics. Typical pure-breed vixen heritage with an equine grandfather resulted in an early and dramatic development. This effect was only heightened to nigh Wingerized proportions by in-play events which resulted in Foxy's regenerative abilities, steady lactation and slow continued growth. Her usual attire consists of a sweater and long skirt, sans underwear to accommodate her exaggerated proportions.

Foxy is typically standoffish, exhibiting periods of smug or arrogant behavior often associated with the doctor archetype. This is partially an act to re-enforce her professional demeanor, but is often also used as a defensive mechanism for the troubled private life she has lead. Despite an openly dominant and sexual attitude, Foxy's range of affection extends from motherly to moderately submissive with no compulsion to harm or control others. She is socially recluse, often found quietly observing in public areas for her next patient while very rarely engaging in peer level affection beyond small talk.

Foxy was the daughter of a full blood vixen and a vulpine/equine hybrid father, no doubt the source of her considerable endowment. Born a hermaphrodite in a family which had not experienced the gender deviance before, this blamed on the father by the family for his hybrid nature and he soon left her mother before the age of two. Raised specifically as a girl, an early puberty at the age of eight caused tremendous family friction when she could no longer wear girlish skirts. By the age of nine, she had surpassed her modestly endowed mother which further deepened the atmosphere of shame. This lead to the eventual running away from home which thrust the young vixen into a life of crime and forced sexual encounters.

Hardened by a street life and unable to continue school past the 7th grade, she bounced through several gangs which exposed her to prostitution, high stakes thievery and at least one count of murder. Circumstances following her plunge into the criminal underground exposed Foxy to an experimental identity altering drug which enabled her to raise the stakes of her criminal exploits ever higher. Able to alter her voice and body structure, biometric security and social engineering were no barrier for her infiltration. Unfortunately, she could never fully change her species or gender from her natural inheritance which prevented her from ever returning home. As the effects of the drug became permanent she adopted the life of a 'super thief', Foxy adopted her alias as her surname and established a presence in SuperMegaTopia as professional thief, Foxy Trinity.

Spoiled by the use of her super ability in the mundane world, fending off heroes and pulling off heists was considerably more difficult in SMT. Running up against numerous technological advantages from SMT Labs, Foxy attempted to infiltrate the high tech fortress to secure some better gadgetry for herself. Posing as a fresh graduate physicist looking for a break, she bluffed her way past the president of SMT Labs herself and landed a fully sponsored resident position in the labs. The lack of any sort of educational diploma was never questioned as she nimbly stole the work from countless others and finished projects in her own name, earning numerous bonuses and the accolades of her peers.

Though established through deception, Foxy took to the various sciences rather well when exposed to the competitive learning environment. Despite her false claim of being a physicist, she was allowed to participate and start her own work in medical, engineering and energy fields. Over a period of months, she transitioned from stealing other peoples' work to creating her own viable projects. Despite the false pretenses of her hire, she was doing legitimate work for the first time in her life. Her corporate expense account was padded with illegal trading on the side and weapons development for the highest bidder. Outside contracts exposed Foxy to robotics and would eventually lead to her first 'daughter', a cybernetic feline/living weapon dubbed "Misery". Unfortunately, Misery would eventually perish in an intense battle with rival villains.

Foxy's involvement with actual relationships has been as troubled as her childhood. Her first love was a young skunk named Cynthia, whom was also a herm. However, an affair with Milkbone resulted in a genetic oddity as Foxy bore her first biological child, a triad mix of skunk, fox and hound genetics from the two fathers at work. The mixed up child, who experienced rapid maturation after Foxy's accelerated gestation, would be a coffin nail for her relationship with Milkbone and stress her relationship with Cynthia. Though Foxy and Cynthia were officially mated by ceremony, Cynthia disappeared several months later. By city standards, the young skunk was pronounced missing or dead and Foxy returned to a legally single life; much more jaded about love than she had been before. Failed attempts to romance Tersi, Topless Lass and others further dampened the vixen's spirits until she decided to leave the city all together.

The departure from SuperMegaTopia was explosive, as the truth about her false doctorate emerged and her employment with SMT Labs was terminated. In a bit for attention and retribution, Foxy assembled some of her finer hybrid technology to combine what she knew of technology and the arcane to channel other worldly forces into herself as a divine host. The plot was ultimately defused by the intervention of a local temple goddess, and resulted in the absolute revocation of Foxy's limited shape-shifting skills as well as her arcane experience. De-powered, Foxy has left SuperMegaTopia and now resides in Layleaux, earning her living through the same black market technology deals she had carried on before while maintaining a seemingly charitable genetic manipulation clinic to the general public.

Foxy now considers herself "retired". She no longer wears her lab attire and rarely solicits new patients in public, but she continues to run her lab and bestow augmentations to willing victims looking to join the ranks of bigger and better.

Foxy's natural talents are primarily attributed to vulpine in general. She exhibits exceptional skill at deception and manipulation, as well as predatory instincts which guide her patient cultivation as if they were prey. Despite her physique, she maintains considerable agility and stamina which is rarely seen in public outside of a brawl. Armed with a small arsenal of technological devices so long as she has her coat near by, Foxy keeps genetic altering serums close at hand to please or disable her company depending on the situation. She can often be found wearing a small ear clip device which amplifies her normally inactive psychic characteristic to read surface thoughts.

Foxy's career of inexperienced scientific tinkering was considerably hazardous, resulting in multiple accidental amputations of various body parts. All solved with stays in the Labs regenerative tanks, but considerably counter-productive. This lead to the self experimentation with a regenerative compound, the only permanent self experimentation the vixen has done. The results were impressive. A severed finger taking only days to grow back, and nigh fatal injuries recovered in a few short weeks.

The side-effects of this super cellular activity resulted in a permanent state of active lactation, severely heightened sperm count, apparent universal fertility compatibility, greatly reduced gestation time and the reactivation of several dormant hormone groups. Following the experiment, she experienced a small increase in height and bust, but over the years her breasts and male characteristics have continued to increase in size. The sustained replenishing of her genetic material also prohibits genetic level changes from adhering to herself, meaning that any alteration to her body that does not agree with her original strain will be reversed.

Foxy's natural ability to alter her appearance, as well as the learned abilities of deeper arcane knowledge have been stripped from her due to the SuperMegaTopia departure; leaving her with less defense against magical tampering or attacks. Previous experiences with males and tentacles have left her positioned against involvement with either, this resistance may present itself in disapproval or fear of defenseless contact with either; this weakness however is often dealt with in reflexive anger and potential violence if she feels cornered.