Domino Doz is a Dalmatian character in Extinctioners. 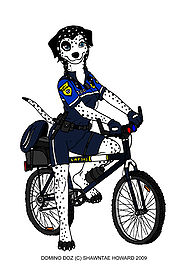 Domino met Cassie when in high school and the two have been friends ever since. While Cassie went to law school, Domino stayed home and work with her family doing the traditional rescue aide jobs (such as life guard at the local beach). But Domino didn't find the rescue jobs very exciting, so she applied for the police academy, breaking the family tradition. It was just shortly after putting in her application that she and Cassie were attacked by Lynx Wylde in Cassie's apartment. Thankfully, their lives were saved by Gerald and Damion. Because of the incident, she and Gerald began a bit of an open romance, neither making the ultimate commitment towards one another, but still enjoying the time they spend with another with the option of sharing each other's apartment keys in the future.