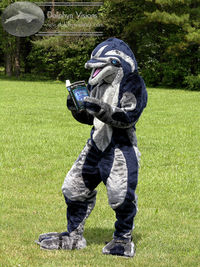 Mineau the Dolphin's original appearance in 2011 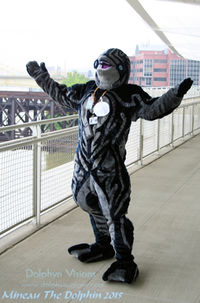 Mineau the Dolphin's updated appearance in 2015

Justin Swatsworth, who goes by the artist name Dolphyn, is an artist, writer, fursuit builder and fursuiter who lives in the United States.[1]

Dolphyn's fursona is Mineau, a navy blue and grey dolphin. Mineau exists in fursuit form, which Dolphyn constructed himself.[2]

Though Dolphyn primarily creates cetacean artwork, he also creates anthropomorphic artwork and characters for the fandom. He has contributed art to the conbooks of several conventions, including Anthrocon, Fur the 'More, and Mephit Furmeet.

"Street Rave", one of Dolphyn's works, was published in the Anthrocon 2013 convention book and was also nominated for Best Anthropomorphic Published Illustration in the 2013 Ursa Major Awards.[3]

Cover of The Origin Chronicles: Mineau

Mineau the Dolphin is also the main character in The Origin Chronicles: Mineau, an anthropomorphic fantasy novel which Dolphyn wrote and illustrated.

The story concerns a young dolphin named Mineau, who comes to realize "the true nature of Life, as well as his own unique role in it".[4]

The Origin Chronicles: Mineau was initially published as a very limited edition print run in 2008. It has since been re-released worldwide as a new kindle ebook in June 2016.