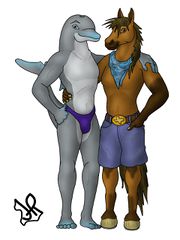 Dolphins are certain aquatic mammals related to whales and porpoises (all of which are sometimes called "cetaceans"). They are social animals, living in pods, where the animals can establish strong bonds with each other.

Dolphins are widely believed to be amongst the most intelligent of all animals. A typical statement is that dolphins are rough as intelligent as a two-year-old human.

The most commonly known species of dolphin is the Atlantic Bottlenose Dolphin, made popular in part by the TV series "Flipper", and by marine parks around the world that display the animals.

There are almost 40 different species of dolphin in total, ranging in size from the 4 foot long tucuxi, to the killer whale, which is actually the largest member of the dolphin family Delphinidae. Porpoises, while closely related, are in a different genus.

Dolphins of any species are among the more uncommon animals chosen for characters in the furry community. They are perceived as an animal entirely without hair, causing many to argue that they don't fit into the "furry" description when the term is taken too literally. However, this is biologically incorrect, or at least imprecise, as dolphins evolved from a wolf-like ancestor that used to roam the land and was furry. Also, like all mammals, dolphins in fact do have hair. Before birth, they grow a number of hair follicles on their rostrum (beak) which they usually lose shortly before or after birth. Dark spots remain where the hairs once were. The Boto river dolphin is the only known species to retain these hairs.

Some people will opt to play a dolphin character as a standard non-anthro dolphin, often with the premise of being isolated to water environments, or possibly able to float through the air by means of magic or technology. Jaidara constructed a bio-mechanical dolphin fursuit for his character Wishy, showing a non-anthro dolphin contained within a mechanical body with legs and arms, able to walk on land.

Others will play their characters as anthro dolphins with legs and arms. The style of the characters tends to be a humanoid form with a dolphin-like head, a dorsal fin extending from the middle of the back, and a tail with dolphin tail-flukes on the end. Notable anthro dolphin fursuits include Calafin, Aphinity, and Mineau.

Colloquial diminutive of dolphin (‘phin), most often used to describe the smaller members of the Odontocetes. The term is non-derogatory, and is often used by an individual, with such a fursona, to describe him/herself in the furry world.

An anthropomorphic Phin will typically have humanoid hands and feet, but with face and tail of the animal from which its form is borrowed. A blowhole can be located on the top of the head. The creature's powerful tail can propel him/her through the water, making Phins excellent swimmers.