The main character was a dingo named Diego. Other characters in the comic included a red kangaroo named Jack, a zorse (horse-zebra hybrid) called The Brumby, Bayshore the otter, the tiger Raj and a female black cat named Zeb, among others.

The comic was set on the fictional Bendigo Beach in Australia. The premise of the comic was Diego's day to day life as he and his friends try to woo the tourists as well as deal with Diego's ex from last summer.

The summary on the back of the graphic novel describes the story as:

"Diego the dingo spends the better part of his days in the company of his local friends, trolling the popular Bendigo Beach for tourists and one-night-stands. However, with the near limitless possibilities before him and the sudden reappearance of his ex-boyfriend, Diego finds himself struggling to make up his mind and sort through his conflicting feelings. Is he happy to remain a footloose beach bum with a voracious sexual appetite, or can he throw away his lifestyle and reputation for an old flame?" 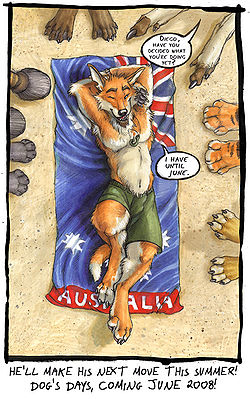 The Dog's Days of Summer placeholder for it's release in June 2008.

The comic initially began as a webcomic. Every Sunday an installment of Dog's Days of Summer was posted on the DogsDays LiveJournal, along with a multiple choice poll that influenced the next installment of the story. Voting ended each Wednesday.

Now that voting week to week on the comic has ended, the LiveJournal is used for updates on the comics publication and Dog's Days related art produced by Blotch.

The comic ran the summer of 2007. The entire comic (including the un-posted second half of the story) has been published by Sofawolf Press in color for it's debut at Anthrocon 2008.[1]

The Dog's Days of Summer was successfully released at AnthroCon 2008 (June 27th) and sold out of all 300 printed copies the first day of sale. A reprint was issued by Sofawolf Press and the initial online release of the comic was delayed several weeks until the new books were in-stock (July 2008).[2]

On 2008 April 8 it was announced that a Dog's Days Hawaiian-style shirt was being produced with Sofawolf Press and would be available for pre-order starting April 15.[3] Sofawolf said they would print only 200 shirts for the first run. 75 shirts were available via pre-order and they sold out in “1 hour and 20 minutes” and the other 125 shirts would be available to be bought at Anthrocon 2008. Any shirts not sold at Anthrocon 2008 would be sold via Sofawolf website starting July 7, 2008.[4]

Main article: List of characters in Dog's Days of Summer

Flayrah has a related story:
Blotch and "Dog's Days of Summer" - The End of Two Stories - A Retrospective