This article is about the movies. You may be looking for the book series.

'The Doctor Dolittle movies are based off of the books of the same name. Not much information is available about the first of these, Dr. Dolittle and His Animals, released in Germany in 1928. The second is the 1967 film starring Rex Harrison in the title role. The third is the 1998 film starring Eddie Murphy. 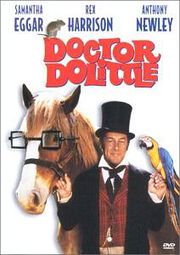 Doctor Dolittle is a world-renknowned ''[sic]'' veterinarian who speaks a wide array of animal languages. He sets off from his home in Puddleby-by-the-Marsh, England, in search of the Great Pink Sea Snail. In so doing, he and his friends meet such exotic creatures as the Pushme-Pullyu and the Giant Moon Moth. This musical is the source of the hit song, If You Could Talk To The Animals. 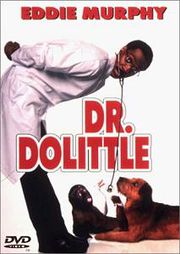 Dr. John Dolittle has the world in his hands: A beautiful wife at his side, two adorable daughters and a career that could not go better. One night, he nearly runs over a dog with his car. The dog yells "bonehead" and disappears. From then on, his childhood ability is back: To communicate with animals. Unfortunately, the word of Dolittle's ability is spreading quickly. Soon, many animals from rat to horse flock to his place to get medical advice. But his colleagues suspect he's going mad, and as the clinic Dolittle used to work for is about to being taken over for a huge amount of money, many decisions have to be made. Believe him? Put him into a mental institution? Sell the clinic? But also his family is close to breaking apart. Until a circus tiger falls seriously ill.

As suggested by the above plot summary and the style of promotional material, this movie was only loosely related to the Doctor Dolittle books.