Dober-Man is a muscled two-legged anthropomorphic Doberman character. He is a fictional character in comic books published by Burcham Studio. Apparently he first appeared in Dober-Man #1, copyright 1989. 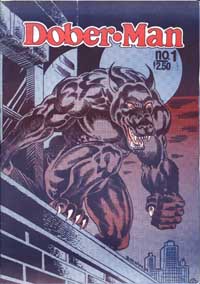 In Dober-Man #1, an unnamed drunk tells us the start of Dober-Man's origin. Dober-Man was a 4-legged guard Doberman at chemical plant Monscento Chemicals. One night a ninja broke into the plant and kicked a cannister of toxic chemicals at the Doberman. The chemicals splashed onto the Doberman and he started to glow. The ninja ran away and the Doberman leaves the plant via a gate that was left ajar. The Doberman continues to glow until he excretes some glowing poop and then continues wandering the city. The origin story is interrupted with the words "TO BE CONTINUED IN STARGATORS #1".