A different character is the Dober-Man in comics published by Burcham Studio. 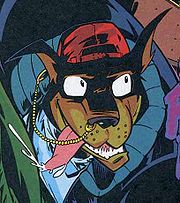 Dober-Man is a humanoid Doberman character in comic books published by Dark Horse Comics. He first appeared in Adventures Of The Mask #3, published in March 1996.

In Adventures Of The Mask #3, Dober-Man told his origin story to The Mask.

Dober-Man was a human boy. After his mother left, his father (a research veterinarian) was so sad about being dumped that he tried to extract the loyalty gene from dogs. The boy was disturbed by his father's state of mind and ran away.

Recaptured by his father, the boy was injected with some "loyalty serum"; instead of making him loyal, however, the serum transformed him into a humanoid Doberman.

After his "dognapping" plan was foiled by The Mask (Adventures of the Mask #3), Dober-Man was sent to juvenile detention; released in AotM #10, he attempted to become the "teen sidekick" to The Mask, but gladly retired after his first encounter with the incredibly-powerful Walter. After this, the character was not seen again in the remaining run.

Dober-Man's canine nature gives him several useful abilities. Not only is he stronger and more durable than most humans, but he's able to control dogs; he used this ability to "dognap" most of the city's dogs, including Milo, the faithful pet of Stanley (The Mask) Ipkiss. His hearing and sense of smell are presumably enhanced as well, but this was not mentioned in the story.