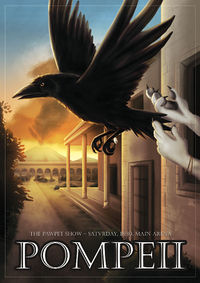 The thirteenth DoPE show, performed at Eurofurence 18, was titled "Pompeii".

The ruins of Pompeii are like a snapshot of ancient history, frozen in time, preserved under the ashes of Mount Vesuvius. They are like a book waiting to be read, page by page and each discovery is like the headline of a new, exciting chapter. However, it is an unfinished story, a plot that ends in many dangling threads just like the lives of thousands abruptly ended on August 24th, 79AD. What if you could pick up one of these threads and write your own chapter? After all, there is no fate. Just a world of possibilities...