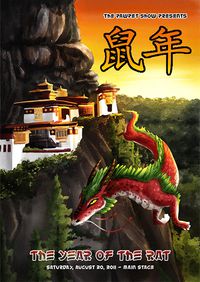 The twelfth DoPE show, performed at Eurofurence 17, was titled "The Year of the Rat".

It is the year 2032. The efforts to reunify Hong Kong and the People's Republic while trying to maintain two separate ideological systems are unravelling the Chinese Government's dominance. The people themselves and the new economic powers are now demanding their say in China's future. Despite strict censorship and constant surveillance, a small but active underground hacker community is waiting for the right moment to turn the tables. Their curiosity is piqued when a 16 Terabyte encrypted memory stick is dropped in their lap on the same day that the CEO of Black Crescent Advantage, China's biggest investment company, kidnaps his own daughter and vanishes without a trace...

Sponsors and super sponsors at Eurofurence got a special USB stick from Black Crescent Advantage. Using the password used in the show by Null the rabbit, it can be decrypted. The archive has a header looking like the ones you see on warez and the decrypted archive has a Linux directory structure. The password for the archive is the same as in the show: "Uneasy lies the head that wears a crown!"

The stick played a role in the storyline as being the contents of BCA's root servers. In real life the stick contained:[1]