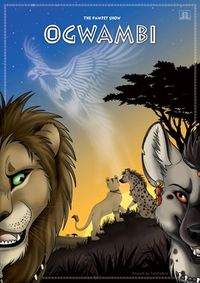 The eleventh DoPE show, performed at Eurofurence 16, was titled "Ogwambi".

During her final year project on the tribes of the Ogwambi plain, Lori finds the history chronicles are missing large bits and pieces. A lot of the old stories were either lost or incomplete. Way back in the past, the indigenous tribes of the different races had to form a very peculiar alliance to survive, but a lot of the old knowledge already has already sunk into oblivion, so Lori and her friends travel overseas to find out what the history books could not tell her. If only she had known that the bond between the tribes was already broken ... and that life in the Savannah was much tougher than she thought.