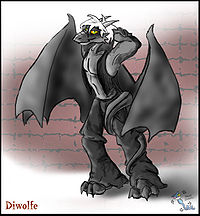 DiWolfe is a dragon who lives in Wilmington, Delaware, U.S.A. He has been a member of the fandom for about 9-10 years now. He started out as a wolf in Furcadia by the name of Wolfe Baratus for about 1-2 years until a very close friend of his thought he would be better as a dragon and purchased him the avatar in the game. When that happened the part Di was added to the first name of the character hereby creating DiWolfe. He has been a dragon ever since.

The name DiWolfe is also known (being used by the same person who is the fur/dragon) in many MMORPG games such as Lineage, Lineage 2, Conquer Online, World of Warcraft, Perfect World, Diablo 2, Halo 3 / Halo Reach, Xbox Live (DiWolfe), Playstation Network (DiWolfe) and many many other games.

He is a side programmer/developer for different games including Lineage and World of Warcraft handling the MySQL, HTML, Database and some Java work for the games and being in charge of in-game and out of game status of his server(s) and handling the in-game custom quests and new inventory items.