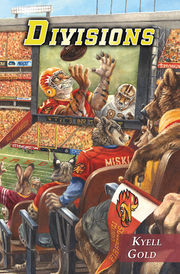 Divisions is an anthropomorphic novel written by Kyell Gold and third in the "Out of Position" series of novels. The cover art and interior illustrations are by Blotch, and it was published by Sofawolf Press in January 2013.

On Thanksgiving, Lee’s father, Brenly, tells his son that his wife, Eileen, and he are having a divorce. While eating dinner, Dev, a tiger who plays football for the Firebirds, calls Lee and invites him to his house that night. Dev introduces Lee to his family, including the highly supportive Auntie Za and his homophobic brother Gregory and his wife Marta. Later that night, Brenly, Lee, and Dev get a motel room. Brenly goes out for a drink to give the boys some privacy. However, Lee notices his absence an hour later and they go out to look for him. After looking throughout the city, the come to find that Brenly got a seperate room to give them more privacy. The next day, Dev, Lee, and Brenly head out for the airport.

Lee moves into Dev's apartment in Chevali, where he's worried he will run into his ex-friend, Brian Dallas. When Lee checks his email, he discovers that Vince King, the gay college player that emailed him in the last book, died and Families United, the religious anti-gay group Lee's mother Eileen had joined, is involved with his death. Lee calls Hal Kimmel, the swift fox freelancer, who tells him he got a call from Brian questioning him about Lee. Lee goes to an interview for a new job scouting for Yerba. He makes a good impression on the scout manager Emmanuel (a fox) during an interview. Lee also asks about sponsoring pro-gay organizations to urge more closeted players to come out. That night, Dev and Lee join Ty, Vonni, Kodi and Pike out to a gay bar and then a dance club. While at the club, Ty meets up with a wolf and Vonni hooks up with a leopard despite being married. Dev is upset when he finds out Lee set them up together. Lee talks with his father about getting back into activism, but Brenly tells him not to take the situation with Vince King too far. On game day, the Firebirds lose against Yerba 26-21. Lee takes Dev out to dinner, then has sex with him in their hotel room.

The Firebirds have made a trade for a cheetah named Lightning Strike, who comes off as annoying by most of his teammates. Strike offers Dev a spot in a commercial that would earn him $1 million. Ogleby tells Dev that his Ultimate Fit contract includes filming 2 more commercials in the next 6 months. Lee contacts Brian for help about Families United to which the skunk agrees. Brian asks Lee if Dev will star in a few PSA's; but the tiger will only agree to it once the season is over. Brian later pressures Lee into bringing Dev to Congress to help sway a vote for immigration rights. Lee tells him no and storms out in anger. Later he has lunch with Hal, who asks him for relationship advice and talks about plans for upcoming Christmas. Dev and the Firebirds travel to Kerina for their next game, but most teammates don't take practice seriously because of Kerina's bad game history. Gerrard invites Dev and Lee to a special Christmas dinner hosted at his house with the rest of the team. The Firebirds win against Kerina as predicted, putting them up with 11 wins and 4 losses.

On Christmas Eve, Brenly stays with Dev and Lee. On Christmas Day, Brenly asks Lee to talk to his mother in a less aggressive tone. The three men head to Gerrard's house for their Christmas dinner. Lee meets Vonni's wife and feels guilty because he set Vonni up with another woman earlier. Lightning Strike shows up and gives everyone (players and family) new iPhones. As a "special present", Strike gives Dev a BDSM kit, which everyone thinks is inappropriate. After Lee brings up Vince King in a conversation, Brenly calls Eileen; Eileen and Lee argue once again over the phone.

Before practice, one of the Pilots' players bashes Dev's relationship with Jesus because of his sexuality. Dev responds by saying football should include all players. Brian harasses Dev about supporting Lee's activism which the tiger replies that he will once the season is over. Lee and Brenly head up to Hilltown to collect their belongings from Eileen's house. Once they arrive, Lee finds out that Eileen and her friend Mrs. Hedley (an otter) burned all of his pride belongings. The four of them get into an argument and Lee and Brenly leave. They quickly calm down over dinner that night. The next day, the Firebirds go up against the Pilots in a game. The score switches back and forth throughout the game, during which some of the Pilots bash Dev's sexuality on the field. Though his teammates back him up, Dev misses an interception in the first quarter, a move that could have changed the whole outcome of the game and the Firebirds lose. Even with the Division title lost, the Firebirds are guaranteed a spot in the playoffs. After a meal with Hal, Dev invites Lee to a team dinner which turns out to be a cocktail party. Corcoran (a fox), the Firebirds' owner, shows up to give a speech and hand out checks to all the players. During the dinner, a jackrabbit named David Rodriguez talks to Lee about a job involving community outreach for the Firebirds. Lee figures out Dev asked about the job on his behalf. Dev gives Lee his playoff check, which Lee plans to give to a gay rights cause. As Dev leaves on a plane to film the beer commercial with Strike, Lee meets up with Brian where he officially parts ways with him and Equality Now. Brian tells Lee that Dev is making him give up a part of himself; but Lee fires back that he is sacrificing a part of him so they can both be happy. Brian leaves frustrated. On December 31st, Lee lies back in Dev's apartment, wondering what the new year will bring them.

Vince King- a bear who's a gay football player; Lee learns he killed himself early in the book, possibly by the hands of Families United

Hal Kimmel- a swift fox; freelance sports reporter who's a friend of Lee's

Vonni DeCarlo- a fox; a cornerback for the Firebirds

Ty Nakamura- a fox; wide receiver for the Firebirds who expresses curiosity for the gay lifestyle

The Divisions audiobook was narrated by Jeremy Sewell and was published in 2015 by Kyell Gold on audiobook streaming website Audible. The narration is 11 hours and 53 minutes long.