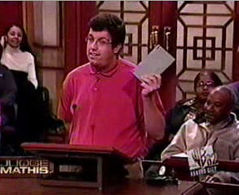 Divefox is best known for have appeared on the Judge Mathis court show when Brady and Cloud Tamer took him on the show in 2004 for alleged back rent, and for damages to Brady's vehicle, a '97 green Ford Contour, which DiveFox wrecked while on a trip. DiveFox counter sued for damage to the hood of his truck, loss of oil, and a missing Toshiba Satellite laptop.

During the proceedings the story was told of the car wreck where DiveFox totaled Brady's car, and it was revealed that DiveFox asked a paramedic to retrieve his laptop. It was then that Judge Mathis made the joke[clarify] which became the now popular catch phrase, "Don't Forget My Internet."[citation needed]

The show's results were as follows: Mathis decided Brady was owed $2000 for his car that was totaled. Mathis said the plaintiffs gave the car a blue book value of $3200, which Mathis noted was for it being in “excellent tip-top shape”.

Mathis further noted that Divefox gave the car a blue book value of $1600, which Mathis commented that was “fair condition”. Mathis decided the median between the two blue book values was $2000. Cloudtamer got 1/2 the rent awarded to him that was asked for. Dive got his laptop back on the show and $100 for the hood of his truck. The oil leak was deemed a pre-existing condition with the truck and was not awarded anything for that.