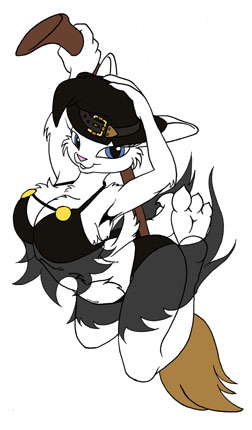 This is about the person. For the extinct species, see dire wolf. For George RR Martin's fictional species, see Direwolves (television) or Direwolf (novels). For the species in Dungeons&Dragon, see Dire wolf.

Direwolf is the handle of amateur furry artist, Brian Stone. Brian began drawing in 2003 as a hobby and has primarily concentrated on adult-oriented, non-nude, female anthropomorphic subjects in pose. However, he plans to eventually expand his skills into a long-run webcomic entitled, BPI, which is short for, Brenda : Private Investigator.

While he maintains a distinct interest in furry art, Brian doesn't consider himself to be a furry, per se, and he has no fursona. The handle "Direwolf" was actually the name of a character that he created on a MUD called Hidden Worlds in 1993, and it just stuck.

Brian has a Bachelor's degree in computer science, and has nearly completed his Master's degree. He is currently employed as a professional software engineer for Microsoft.

Brian has been greatly influenced by artists such as Jay Naylor, Eric W. Schwartz, and Max Black Rabbit. Between 2003 and 2004, he volunteered as a new applicant moderator for the VCL.