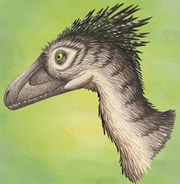 Dinosaurs are a diverse group of reptiles belonging to the dinosauria clade. It is from the greek meaning "terrible lizard" and was coined in 1842 by Richard Owen.

Dinosaurs arose in the early Triassic period, around 231 million years ago, from archosaurs (a division including dinosaurs, crocodiles, pterosaurs, and many other less well-known groups), and radiated in the early-mid Jurassic period, reaching their greatest diversity around the late Jurassic and early Cretaceous. Most lineages of dinosaurs became extinct during the Cretaceous–Paleogene extinction event[1] around 66 million years ago, which caused the extinction of approximately 75% of all plant and animal life on Earth at the time. The only remaining dinosaur lineage is that of modern birds ("avian dinosaurs"). 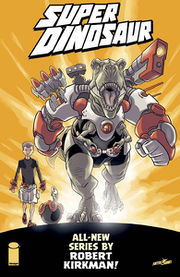 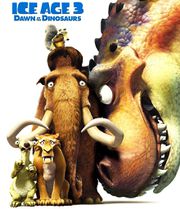 Ice Age 3: Dawn of the Dinosaurs 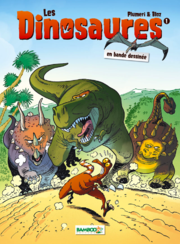 Dinosaurs in popular culture have often been depicted as a giant, lumbering, and cold-blooded beasts. In reality, the group was highly diverse with organisms ranging in size from 28 cm ('Ashdown Maniraptor' — unknown species[2]) to 60 m in length (Amphicoelias — rough estimate) and were dynamic active animals. As a whole, dinosaurs were highly likely to have been warm-blooded. This is reflected in the development of feathers in the theropods (the bipedal, largely carnivorous dinosaurs) as insulators.

There are two major clades of a dinosaur, which are based on an early divergence in the structure of the hip joint in the mid-Triassic:

All dinosaurs are known to be terrestrial, with flight developing in theropods around the Middle Jurassic. There are no known marine dinosaurs, although trace fossil evidence suggests some species could swim well. The ancient marine reptiles, ichthyosaurs, and plesiosaurs are, contrary to popular belief, not dinosaurs, and are in fact more closely related to modern lizards than to dinosaurs.

Exceptional preservation is required to preserve anything other than bone and teeth. This is exceptionally rare, but, despite this, a large number of theropod dinosaurs have been discovered with extensive downy feathers covering their whole bodies. They also had have been shown to have long display feathers on the forelimbs, the tail ends, backs of their heads, and the back of the hips (depending on the species). It is, however, becoming more apparent that possibly all theropod dinosaurs had feathers. Some ceratopsians have also been discovered with 'quill' like structures along with their hides. It is now being considered that quill-like structures evolved in early archosaurs and that the 'fuzz' on pterosaurs is related to both the ceratopsian quills and the theropod feathers. Preserved skin samples of some ornithopods and sauropods suggest that they at least partially lost these features and had a tough scaly hide.

The color of dinosaurs has long been a heated debate. Until very recently, it was impossible to determine the actual colors of a dinosaur. However, a new technique has been developed to accurately determine the color of feathered dinosaurs. This has so far only been used to completely establish the colors of the dinosaur Anchiornis huxleyi[4]. Since this technique can only be used on samples with exceptional preservation, there is still a wide scope for coloration among many groups of dinosaurs. Research is currently being done to color more species.

Although the dinosaur lineage still exists today in birds, dinosaurs underwent a massive extinction event approximately 65.5 million years ago. Their diversity was greatly reduced, with the loss of all ornithischians, all sauropods, and most of the theropods. The extinction occurred at the end of the Late Cretaceous (also the end of the Mesozoic). The extinction event is commonly known as the KT event (K representing Cretaceous and T representing Tertiary, which has since been renamed as the Paleogene) and it greatly affected many other groups too. Pterosaurs, mosasaurs, pliosaurs, plesiosaurs, belemnites, ammonites, and many others were all wiped out and plantic forams, calcareous nanofossils, land plants, and rudist bivalves were all severely affected. The extinction even had little to no visible impact on the insect populations[5].

There is still heated debate about the actual cause of the extinction event(s). The paleontological community is roughly equally divided among it. Although there is a prominent iridium layer present at the KT boundary (strongly suggesting a bolide impact), the associated tsunami deposits that should be associated with it don't seem to be present at sites across the world where they should be and there is still no impact crater recorded of the right size with the right age[6]. Many of the groups in question here were already in decline and there is also an associated volcanic event that occurred at the same time. This volcanic event is known as the Deccan Traps and undoubtedly would have had a significant impact on the planet's climate and animals (as was shown with the Siberian Traps and the Permo-Triassic extinction). Research into the Deccan Traps is still ongoing. The currently accepted 'middle ground' is that it was probably a combination of events that lead to the final decline and extinction of these taxa.

There are many dinosaur characters present within the furry fandom as a popular scalie choice. The majority of these tend to be theropod dinosaur characters and are almost always based on the Jurassic Park misrepresentation of a Velociraptor with some feathers and quills stuck on. They also tend to be described as cold-blooded, due to a general misconception. Characters based on other species of dinosaurs are rare and complete fursonas based on them are even rarer.

In an attempt to expand public ideas of dinosaur character creation, Palaeofox developed the character 'Pecky'. Pecky is a Troodon formosus and so is somewhat similar morphological to a Velociraptor, but is more slender with a narrower snout and was probably an omnivore. His aim in developing this character was to allow furries to see that there are many different species of dinosaur they could base a character on, even if they specifically like the 'theropod look'.