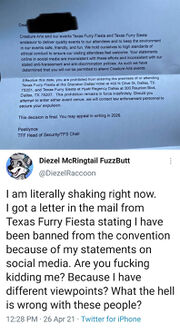 Diezel's and US Goverment intervention

Diezel's fursona is a raccoon.

In 2016, Diezel was one of the individuals featured in the Fursonas documentary.[3]

This meme came about on January 12, 2021, when after Diezel tweeted:

Which Diezel replied to with the now infamous:

Which quickly became a popular meme in furry Twitter, with fandom personae such as Boozy Badger commenting on it, and with some furry businesses created merchandise based on the phrase.[5]

On April 2021, Diezel was banned by Texas based Creature Arts from attending their local events (Furry Fiesta and Furry Fiesta),[6] citing the following:

While in the end Creature Arts stated their decision was final, he was given the opportunity to appeal it around 2026.

(*) "(Creature Arts) endeavor of delivering quality events to our (even) attendees and to keep the environment in our events safe, friendly, and fun, (while holding) ourselves to high standards of ethical conduct to ensure our visiting attendees feel welcome."

Under the Twitter aliases @TruthJustice87 and @FurryFairness, Diezel Raccoon tried to convince Senator Ted Cruz, Congressman Louie Gohmert, Texas' Governor Greg Abbott,[7][8] and the City of Dallas, that the "furry fandom" was trying to silence the Republican Conservative voices within it, specifically by the "BLM/Antifa furries", more concretly those attending Texas Furry Fiesta and Texas Furry Siesta in Dallas, Texas.

Diezel deleted both accounts when called upon it.[9]