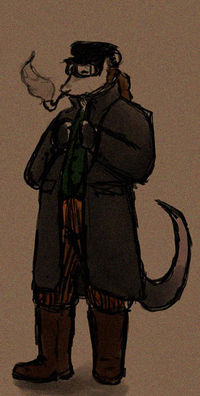 Didelphis (born May 19)[1] is a furry artist who lives in Southern California. His main character is a Virginia Opossum (Didelphis Virginiana). He also goes by Steampossum online and prefers to be referred to as "Di" or simply "Possum".

Didelphis' character was originally created as a rather unimportant badger/opossum hybrid, but was quickly adapted as his fursona, whenceforth the badger aspect was phased out altogether. The character has remained the same species since, with the most major changes in appearance being that he was changed to look more like his creator.