Diana Vick is an illustrator and writer whose work has appeared in numerous different genres through the years. She began doing fan art in fanzines, including Apaloosa and BCApa back in the early eighties. 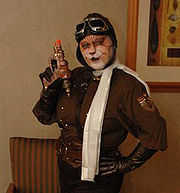 One of Diana's early influences was Wendy Pini’s Elfquest and she did artwork for many of the Elfquest fanzines. She has been a guest of honor at Conifur Northwest 1998 in Seattle, Darkcon 2004 in Phoenix, and Furlandia 2016 in Portland, Oregon.[1]

Diana resides in Seattle, Washington, USA with her husband. She is the co-founder and vice chair for Steamcon, a steampunk convention.

Diana's introduction to furry fandom began when she met Steve Gallacci and read his anthropomorphic comic, Albedo #0. Soon after she began contributing to Rowrbrazzle and Gallery, and creating her own characters.

Diana regularly attends furry conventions on the U.S. west coast, where she sells prints of her art, merchandise with her art on it such as mousepads and greeting cards, and does sketches. She was the Guest of Honor at the first Conifur held in 1998.

Diana also enjoys costuming at science fiction conventions. In 2007, she did a kitsune costume at Norwescon 31. In 2009 she did a version of catkind from Doctor Who. 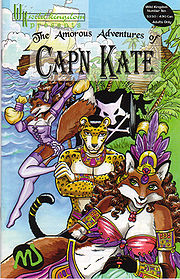 Edd Vick (no relation) invited Diana to do production work for MU Press, and eventually she became the art director. During her time at MU she helped create books such as Beauty of the Beasts and Wild Kingdom (now WILD!) which she also contributed artwork to.

Her main character, the pirate Cap’n Kate appeared in Wild Kingdom #1 & 2 and later was featured in a full length book, Wild Kingdom #10- "WK presents the Amorous Adventures of Cap’n Kate".

Diana teamed up with SS Crompton and Edd Vick to include Kate in Demi’s Wild Kingdom Adventures #1, published by Carnal Comics. She contributed pin ups to Hit The Beach ’97 & ’99 by Radio Comix. She designed the uniforms for the Nightrunner stories by Tom Milliorn. One of her favorite projects was creating cloisonné pins of various characters for MU Press.

In 1995 Diana began to do card art for collectible card games such as Magic: The Gathering and Legend of the Five Rings.

She has had around a hundred and fifty cards published in various games. In other venues, she did cleanup work for several animated series such as Gargoyles and WildC.A.T.s, and helped ink an issue of Strikeforce: Morituri for Marvel Comics.