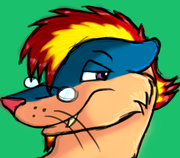 Devon (also known as Dev or Devonicus; born October 9, 1990) is a furry who lives in Portland, Oregon, USA. He is mated to Kitten D'Vodka.

Devon has been in the furry fandom officially since 2011. It all started when his girlfriend asked him what animal he would be if he was a furry. As of August, 2013, he has never been to a furry convention, but has been to anime conventions, and is also very involved with the anime fandom.

Devonicus Maximus is a male Quilava/Wolverine, that dresses up like Link from the Legend of Zelda series.