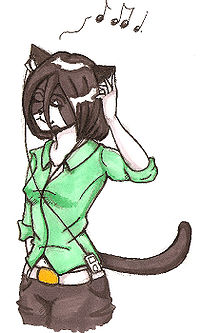 Squeak (formerly known as Despoena) is a black and white housecat. She has a love for illustration and music, with no particular favorite genre (though her favorites range from The Residents to Modest Mouse to Cursive and more).

Squeak has a wide range of interests, from gaming to music to art. She frequents GaiaOnline under the same name. Her favorite bands at the moment are The Residents, Modest Mouse, Cursive, Mirah, The Pogues, Rufus Wainwright, and Scout Niblett. She has been called by many to be an "indie whore", but she denies this. She will listen to anything, even Nirvana on occasions. She has no favored art style, though she leans more to cartoons and illustration. She does happen to love Renaissance and Roman art. She never really payed attention to art history.

Squeak also plays a few games, such as World of Warcraft and Guitar Hero. Though she still has her original Pokemon card deck (a green deck), she does not like the newer Pokemon games for she is sentimental about the original 150 Pokemon, not the new ones.

The basis for Squeak's appearance stems from her former pet cat, Squeak. Squeak lived a short life of two years before she was hit by a car. Since then, Squeak took her likeness into a fursona. Her current boyfriend, Ibun, consoled her during this hard time and eventually led her into the fandom.

Squeak is a small cat, in stature and form. She has shoulder-length black hair, likes to wear long sleeve shirts, and jeans or corduroy. Sometimes she likes to wear button-up white dress shirts with vests on top and black pants like a mobster. She has huge green eyes, much like a child's. Her back is covered in black fur, which goes to the top of her head and over her right eye. Squeak's paws and stomach are bright white. Her favorite color is green. She is usually seen sitting with her headphones on listening to music and sketching in her sketch book.