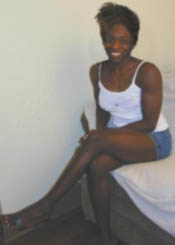 The only known picture of Desiree Lee.

Desiree Lee is a female furry artist that got originally involved in the furry genre by drawing parody artwork. Since then, she has gone on to producing her own original artwork with characters designed either by her, or her late friend Jim Hardiman.

A college graduate, she currently works in an art-related field (information about her job, schooling and/or real name are highly guarded).

Desiree's fursona character is a chameleon.[1]

A rumor has been thoroughly pushed around and discussed that Desiree Lee is in fact fictional, and merely an alter-ego of Jim Hardiman himself. Various pieces of evidence have been put forth to support this view such as:

This allegation has slowly been propagated over the years through forums, mailing lists, and lately, through image boards such as 4chan, Onechan or Sidechan[2], but it has never been adequately proved and/or refuted.

No artworks or characters by Desiree are known to be currently posted online other than through some vendors and media sites. Many were on Jim Hardiman's Skunked.com website, which has since been taken down after his death in 2014. By The Tail was her most recent webcomic project she was working on with Hardiman.[3][4]