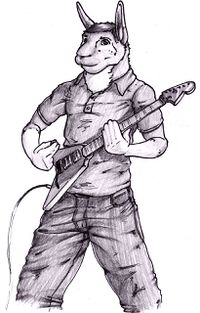 Derrick Lesters is a furry artist, fursuiter, and musician who resides in Owasso, Oklahoma, USA. More recently, he has been pursuing ventures in the My Little Pony inspired brony fandom where he released his debut album, "My Little Putrefaction" on May 1, 2017 under the solo groove metal project, Stallionslaughter.

Lesters was once the president of the Tulsa Area Furs (TAF),[when?] a furry fundraising group for an exotic animal rescue organization.

His current fursuit is Samuel Blackpaws, a German shepherd created by the Menagerie Workshop, which he plays drums while wearing. His former one was Harley Husky, a partial wolf/husky mix suit.

Derrick Lesters' fursona is a Llama.