Demon likes to watch movies such as the Star Wars saga, X-Men, Spider-Man, The Punisher, Ultimate Avengers, X-Men Origins: Wolverine, Elektra, Daredevil, and horror movies. He is a massive Ghost Adventures fan and an avid fan of Doctor Who & Torchwood. He is a fan of the wrestling WWE with favorite wrestlers being The Undertaker, Kane, Eddie Guerrero & Chris Benoit.

Demon plays World of Warcraft, where his characters are a level-83 troll of hunter class, a level-80 troll of death knight class, and a level-22 worgen of druid class. 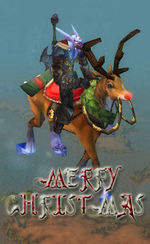 Demon's lvl 83 Troll Hunter During Winterveil on Wold of Warcraft

Demon can also be found on IMVU, where he is known as JuggaloDemonQuoll. He does commission work as an Avi Pic designer for various IMVU users, and is also a freelance graphic designer and sketcher.

He is also one of the few Juggalos in Australia[citation needed] and is an avid listener of Insane Clown Posse, as well as Metallica, Faith No More, Joe Satriani, Twizted, Megadeath, Zombie Girl, and Rob Zombie to name a few.

Demon grew up in Padstow, a small suburb in the southern area of Sydney just near Bankstown. Brought up by his grandparents for the first 18 years of his life; after winning a custody case against his mother who suffered from drug and alcohol abuse which went on from 1981-1985. From 1985-1990 he went to school at Padstow North Public and went on to Sir Joseph Banks High in Revesby.

He also did various sporting activities such as soccer, touch football, tee-ball, baseball, basketball, hockey, swimming & volleyball, which he enjoyed doing with his grandparents until his grandmother passed away in 1992 and then his grandfather in 1998 just before his 18th birthday which started Demon's adventures out in the real world.

Upon the death of his grandfather, Demon moved from the only home he really knew and moved to Liverpool where he spent about a year in youth accommodation and unfortunately fell into the wrong crowd and started doing drugs and drinking quite a bit to cope with the life forced upon him which wasn't helped by his mother when she came back into his life and encouraged his drug usage.

A couple of years later, at 20 years-old, he started attending church with friend he had made through a welfare ministry Jason Martinson that helped him get off the drugs and even helped him get baptized and teached him a few things from the Bible but this friendship was short lived during a period of time where Demon was looking for a place to live Jason let him stay at his apartment for a few weeks until one morning Jason was found dead in his bed and Demon was faced with the task of informing Jason's family which also drove him into yet another depression wrought with more drug use and suicide attempts and many failed relationships spanning 4 years.

Yet another few years later Demon had moved around quite a bit virtually covering the whole eastern side of Australia til he had settled in Mitchelton where he lived in a shared student housing and met Sarah the woman who would later become his wife. They spent several weeks getting to know each other and decided to visit her family in Ballina for his birthday, but came to know of her father being rushed to hospital for a brain embolism. After spending a couple of weeks with her family they both returned to Brisbane and not long after returning becoming engaged and then married several months later in 2004. Their marriage would only last a few months until Demon went back down to Ballina to look after Sarah's sick father in which he formed a special relationship with him becoming the father he had always yearned for til his death a couple months later.

Since then Demon has moved several more times over the presiding 6 years around Brisbane living with his good friend Colin (Kllauw) a fellow furry who to Demon was like a big brother/father figure their friendship has lasted through almost 10 years and is still strong as ever which brings us to now Demon now lives in Ballina where he plans on getting his life put back together.