Define "Cynical", usually shortened to DC, is a furry community founded in 2003 as a discussion website for the webcomic Ozy and Millie. In its early days, DC was populated largely by O&M fans and self-loathing closet furries but has since departed from its O&M roots and matured into a community of self-assured furries who celebrate furry culture. A member of DC is called a DCer. DCers are from diverse geographical locations but the majority have attended DC meetups. There have been many meetup locations but the most common by far is Midwest FurFest where a significant portion of the DC community has been in attendance every year since 2010. As of 2017, DC has at least 30 members who are active within the community on a daily basis and an extended member base of over 100. 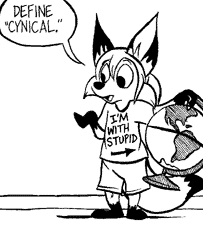 The eponymous Ozy and Millie comic strip was published on Dec. 29, 2000.

Simmo founded Define "Cynical" on October 5, 2003, as a forum dedicated to the appreciation of Ozy and Millie. The first few months saw rapid growth, during which the website branched out to cover many more topics, support posting of member-contributed fan art, and introduce an IRC channel. News and politics became popular discussion topics owing to the political themes often present in Ozy and Millie, and all types of discussion were typically laden with O&M memes.

In late 2005 the forum was thrown into upheaval by a string of hacking incidents perpetrated by one identifying himself as "Hacker Vietnam". His vandalism, which seemed to only serve the purpose of his own self-aggrandizement, caused threads to be decategorized, posts to disappear, and ultimately took the forum out of commission for many weeks. In a bid to restore order to DC, the unprepared Simmo ultimately stepped down as administrator and handed the reins to likeafox. likeafox ended the forum's downtime by migrating the site to a personally-run server, migrating forum software from Invision Power Board to PhpBB 2, and assembling a team to recategorize forum topics. A newly designed custom DC forum theme was deployed soon afterward. Curiously, and despite extensive damage caused, Hacker Vietnam's antics were actually met with widespread adulation, particularly for his commandeering of Simmo's admin account to post "fuck to all member". To this day he lives on as a legend within DC.

D. C. Simpson, the creator of Ozy and Millie, initially publicized the forum on ozyandmillie.org, which was widely considered to be responsible for DC's early bubble of popularity. Simpson would also occasionally contribute to the discussion on the forum. Then in December 2006, there was a flame war at Simpson's expense and, because of forum politics existing at the time, the incident resolved disfavorably for her. As a result, Simpson revoked her endorsement of the community website, on the basis that she did not want her comic associated with a community she deemed to be of ill repute.

Conclusion of O&M, and culture shift[edit]

On December 28, 2008, Ozy and Millie published its final comic. With a frustrated user base, and now the community's central theme dwindling in significance, DC faced an uncertain future. Deliberate efforts to find a replacement topic proved ineffective, and with lack of directed discussion it didn't take long for forum participation to begin to fall off. The more personal and disorganized nature of IRC fared much better without a theme, and many members took to using IRC exclusively. It was a natural progression over the few years that followed that lead DC to become a definitively furry community: By the time Ozy and Millie had ended, the furry culture had become much more widely accepted within DC, and many began branching out in their appreciation of it.

Before 2009, DC meetups were comparatively small and infrequent, with never more than a few members meeting at a time. In 2010, Simmo toured North America, visiting as many DCers as possible, culminating in a gathering at MFF of at least a dozen members. This unprecedented event created the spark within the community that would lead to much more togetherness. DC has attended MFF every year since. There grew demand for more DC-focused gatherings too, and so the very first DC Con was held in 2012 at a cabin in the US state of Georgia. It was also in 2012 that "DC House" began, which saw 6 DCers all sharing one house in Ohio.

Activity on the forum continued its steep decline every year until mid-2014 when it was finally shut down permanently. It remains archived on the website in read-only mode. DC Con 2 was held in Summer 2014 at a cabin in Ohio and may have been the largest gathering of DCers to date. That same season, DC House disbanded, partly because the house they were renting was going up for sale. In 2015 a DCer named klimt passed away. As a member of 8 years, he had spent a significant portion of his life with DC, and his passing was felt within DC for long afterward. A DCer named Matugi, a prominent artist in the community, passed away in 2019. Years of people using their phones more and computers less made the limitations of IRC as a platform more apparent; by 2015 activity in IRC too had fallen off considerably. DCers explored alternatives until Telegram was found. The migration of DCers to Telegram was not immediate but, once in full force, it caused an explosive revival in DC's online activity. DC's Telegram chats remain extremely active today, and even many old DCers that had drifted away from DC have now rejoined. A variety of spin-off Telegram rooms were created, most notably a no restrictions (DCNR) and an after-dark channel (DCAD). DC continues to regularly organize gatherings. In April 2017, a US west coast road trip made contact with 17 DCers.

Define "Cynical"'s mascots are Marty and Martini, both foxes. The original designs of DC's mascots are by CritterEli, but owned by and with a contribution by the community. An additional fox, Bellini, was created by Airyu to represent the spin-off channel DCNR.