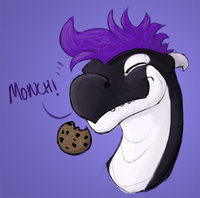 Deets The Dragon, also known as Deets, is a furry fan who, according to their Twitter, lives in North Carolina, USA.[1]

Deet's interests include motorized vehicles, computer games, and "yiff". As of September, 2017, he has clocked in an average of 10.4 hours of BeamNG.drive on PC every two weeks, an average of 28.2 hours of Grand Theft Auto V on Xbox Live, as well as 44.2 hours every two weeks on Forza Horizon 3 in combined PC/Xbox Live game time.