Deer Me is a roommates/slice-of-life webcomic by Sheryl Schopfer. Introduced on 21 November 2003, it was updated sporadically for the first year or so, but eventually fell into a fairly regular weekly update schedule.

Viana Doesulen - White-tailed deer. Viana is the resident grouch, though she has redeeming qualities...somewhere. In her defense, she always seems to find herself in the most outrageous situations at work, which might make anyone cranky. She's the one with the headband/eye mask thingy.

Thomas Millwood - White-tailed deer. Thomas is an easy-going guy, but he does have a hidden violent streak that shows itself on those rare occasions he becomes extremely annoyed, such as when Velvet won't stop playing a particular song over and over again (he destroyed the radio that was playing the song with a baseball bat). He is known to get very enthusiastic around holidays such as Christmas. He also has a quick wit and considers himself a macho man--an image he is quick to defend when he finds himself suddenly bereft of his antlers.

Velvet Hairyson - Horse. Velvet is one of those child-like individuals that can be cheerful to the point of irritation. Nevertheless, she is very intelligent and her carefree nature has served to keep her out of trouble on occasion. Largely due to her attractive appearance, she has gotten several boyfriends and admirers, all of which, had their hearts broken by her. She has also been known to forget her date's name largely due to the fact she has apparently been in love thirty-seven times.

Woola Ramson - Sheep. Woola is, for the sake of brevity, pretty much a polar opposite to Viana, yet somehow, they are lifelong friends. Perhaps she proves the saying that opposites attract. She is a faithful friend to Viana and always there to make her friend laugh or just offer a shoulder to lean on. Woola is married to husband Thondy Ramson and has a very inquisitive young son named Devan.

The artist occasionally appears "as herself" in the form of a bobcat. 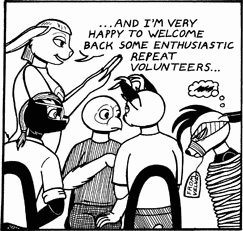 Viana finds herself roped into another convention

One of the supporting characters, Jared Raul, supposedly created a comic strip called "Wombat Wonder" which occasionally appears in place of a regular strip. It has no plot whatsoever, but consists of four frames of a wombat on top of a rock. The punchline is always the Wombat making some little noise (it said "yobo" in the early "Yobos, Inc." story arc.)