Deer Boy! is a funny animal comic strip drawn in daily comic strip 3-4 panel format by Brien J Miller. Begun in 2010, it was updated twice weekly until March of 2012, at which time it became once or twice a week. Deer Boy! generally features vignette style stories told over several strips involving it's regular characters in ongoing adventures.

Miller says Deer Boy!'s comic's origins were earlier comics written in high school out of the urge to simply have an adventure - often written in the school library or up in a study room to have "fun," while avoiding socializing in high school.[1] Miller, a professional systems engineer and award winning game designer,[2] worked on three unpublished anthropomorphic novels and an anthropomorphic independent film prior to undertaking Deer Boy!.

Miller openly acknowledges on the site that the direct inspiration for the strip is multi-fold citing Andy Cap by Smythe, BC by Johnny Hart, The Wizard of ID by Hart and Brant Parker, Eek & Meek by Howie Schneider, Get Fuzzy by Darby Conley, among others. Specifically, he names Bloom County by Berkeley Breathed, and Calvin & Hobbes by Bill Watterson, as inspiration for the writing claiming that Breathed's and Watterson's work as Deer Boy's starting spark. Some commenter's on the site have noted some stylistic similarities with the early Bloom County strips. 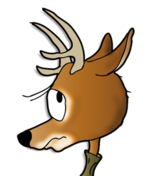 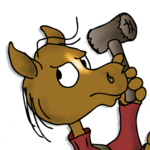 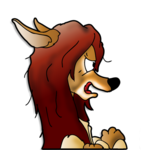 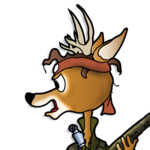 Deer Boy! centers around four key characters: Destrian Dagonhart, the strip's namesake and principle protagonist; Colt, his friend; Karl, his older cousin; and Doe, his girlfriend and "trothed," a term in Deer Boy! to indicate some form of marriage.

According to the Deer Boy! website, Destrian is an easy going, overly-intellectual young buck with an eye for the irony of life. Known as "Des," he is the nephew of the Deer King of the Mystical Forrest and perpetually the 42nd in line to inherit the throne. Destrian was employed in the Royal Library but was fired for being absent (due to one of his adventures) by his then future mother-in-law, Mrs. Bettencourt, the head librarian. Des later found employment working for his cousin Karl as a "Arms Sales Representative" selling arms and munitions to various clients, a profession his trothed Doe, is unhappy with.

Destrian's full name, Destrian Descartes Dagonhart, is a reference to the 17th Century French French philosopher, mathematician, and writer René Descartes (March 1596 – 11 February 1650)who has been dubbed the 'Father of Modern Philosophy.' Much of subsequent Western philosophy is a response to Descartes' writings.

Destrian can be recognized by his antler's point count: Des is a Four-Point buck, with two points on each side. He usually wears a green shirt and tan pants with tall black boots. Occasionally, he can be seen in differing outfits, but it is rare. In 2013, Destrian, who was accidentally nabbed as a truant student by the Sisters of St. Lolita's School, won for their school the prestigious Papal Templar's Award for Knowledge, won with the answer "42" to a rapid fire series of questions. "42" references a famous line in The Hitchhiker's Guide to the Galaxy, a comic science fiction series created by Douglas Adams, in which "42" is the universal answer to everything.

Des is who the web comic is named for and hence is the "Deer Boy."

Colt is Destrian's destructively inquisitive horse friend who spends his day tearing apart various equipment and machines, recombining them into fantastical technological devices such as a time-machine made of old parts from three old cars, a farm combine, and a hummer engine. The web site states that Colt is a miniature horse and Colt himself has stated that his mother was a Belgium, potentially implying a Belgiam draft horse. An extrovert with tremendous confidence, Colt often introduces trouble into the otherwise serene Deer Boy! world

Unlike the many deer characters, Colt appears to have no other name but "Colt." The comic states that Colt was acquired to be a dressage pony for The Colonel's niece, Sylvia. Since early 2012, it has been implied that Colt has somehow escaped "the farm," and lives in the Deer Enclave in the Mystical Forest where he has taken over an old forge and produces swords for the King. The ongoing conflict between the Colonel and Colt is a principle source of storylines in Deer Boy!

Colt's favorite sayings are a distainful "Pah!" when he disagrees with anyone, and "Whaddup Cervid?," a greeting used when seeing Destrian.

Doe is Destrian Dagonhart's paramour; at first girlfriend, and since mid 2012, Des's "trothed," the deer character's form of marriage. Doe is described as a cheerful, altruistic, red-headed young doe with a pastoral sense of the romantic who is constantly aghast by the antics of Des' best friend Colt and arms and munitions sales of Des' cousin, Karl's business. According to the comic's author, Brien J Miller, Doe's full name is Delores Eleanor Bettencourt, now Dagonhart. Reportedly Eleanor is a reference to Anna Eleanor Roosevelt, the longest-serving First Lady of the United States.

Karl Dagonhart, also known as Cousin Karl, is Destrian’s older cousin and according to the Deer Boy! site is “considered... to be a psychopathic whack job” because of his possession of a wide variety of firearms. Karl is portrayed almost always carrying an automatic rifle and operates an international arms and munitions business from “Camp Karl,” a Vietnam War era looking outpost located in an unnamed nearby swamp away from the Deer enclave. Camp Karl includes a series of caves in which Karl (and later, as an employee), Destrian conduct Dagonhart & Dagonhart’s operations. It is stated that Karl supports Cervid revolutionary fronts around the world, the most notable of which is shown as the Arctic Rangifer- Santa Clause’s reindeer.

Karl full name is Karl Augustus Fredierch Dagonhart and is drawn as a six point buck, dressed in a U.S. Army Vietnam era style green and black camouflage. The names 'Karl, Augustus, and Freiderich" are common names found in the Prussian monarchy and among the Prussian military and implies a marshal theme to Karl. The human character ‘the Colonel,’ appears to know Karl, referring to Karl as “Major” the military officer grade. The exact relationship between the Colonel and Karl is not explained. Karl’s personality is a blend of confidence and sardonic wit. He is quick to grasp a tactical solution to every problem.

According to the Deer Boy! website, Karl is 38th in line for the throne, ahead of Destrian by four positions. Although the strip does not specify the exact family relationship between Karl and Destrian they both refer to the King as “Uncle King Fred,” implying that they are in fact natural cousins. In 2011, Karl met Doe’s older sister Rae and Karl and Rae are trothed.

According to the author's comments on the Deer Boy! site, Karl is the most popular character in Deer Boy!